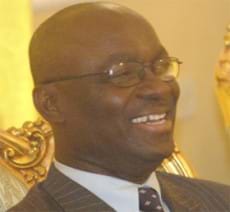 
The name of George Owusu, the man whose untiring efforts led to oil discovery in Ghana, was missing in yesterday’s oil launch. He and others were eclipsed by a concentrated dose of politics in a deliberate act of rewriting the history of Ghana’s oil find. Before yesterday’s event, Ghana had been prospecting for oil in large scale without success until EO Group, led by Mr Owusu, brought in Kosmos Group to drill oil at Cape Three Points in the Western Region, striking oil in commercial quantity over three years ago. Mr. Owusu, who was the former country manager of Kosmos Energy, was the one who took the oil block at Cape Three Points, after getting a license from GNPC and went round the globe to seek investors before Houston-based Kosmos agreed to take the risk in investing in Ghana. What he started in 2004 has now borne fruits and Ghana’s dream of commencing full-scale production of oil in commercial quantity became a reality yesterday. The sad news however is that Mr Owusu, who is currently the Chief Executive of E.O. Group, and other architects of the oil project, had been humiliated in the past, thereby denying them the fruits of their labour. Mr Owusu was booted out of office as the country manager of Kosmos Energy. Prior to his orchestrated dismissal, DAILY GUIDE learnt officials of the Bureau of National Investigation (BNI) visited the offices of Kosmos Energy to scan and search Mr. Owusu’s computer for vital information, especially how he ran the company, with an intention to find incriminating documents. Mr Owusu, whose name is synonymous with Ghana’s oil, is being investigated by the National Democratic Congress government on suspected criminal acts which characterized the dealings between the EO Group and Kosmos Energy operations in the country. The EO Group has 3.5 percent interest in Ghana’s first oil find. Mr Owusu told journalists on Tuesday that for Ghana to benefit from the oil find, Ghana needed to have a lot of George Owusus. In his emotional address to the press, when his company and other Jubilee partners met journalists in Accra ahead of yesterday’s inauguration of first oil, he said Ghana could only reap the benefit of the oil if more George Owusus were created. “These are the kind people who will stay and invest in Ghana. Until government supports the local entrepreneurs, the foreign players in the oil sector will continue to have the lion’s share,” he stated. “After getting my license, I went round the globe to seek investors but they all refused to come to Ghana except Kosmos. They asked me where Ghana was located and that they don’t think the country has oil,” Mr Owusu added. He continued: “Our Jubilee partners, who are foreign oil investors, are not fools. They are into business to make profits and they will ensure that they make their profits first and foremost and then send it back to their respective countries.” He said communities like Obuasi, Wassa and Prestea could not benefit much from gold production because local entrepreneurs were not supported to take-over the mining sector. “Those who benefitted from the mining project are the foreign investors who brought their own monies outside Ghana,” he stressed.