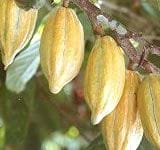 
Agona Swedru (C/R), Sept 13, GNA - Cocoa Production in the Central Region declined from 62,000 metric tones in 2007/2008 to 56,000 metric tones in 2008/2009. Mr Ebenezer Opoku-Agyeman, Regional Manager of the Quality Control Company Limited, who made this known when he interacted with workers of the Company at Agona Swedru, attributed the decline partly to erratic weather. He said that cocoa production in the Region in 2005/2006 was 37,000 metric tones adding that cocoa farmers increased production to 62,000 metric tones in 2007/2008. Mr Opoku-Agyeman said that comprehensive measures have been initiated to increase production in the subsequent years. He said the Company in conjunction with the Central Regional branch of the Cocoa Coffee and Sheanut Farmers Association would educate farmers on best agriculture practices to increase production. Mr Opoku-Agyeman said the Company would also assist cocoa farmers whose farms along the Ayensu, Ochi and Akora rivers were destroyed by floods, to revive them. Mr Sekyim asked workers of the Company to ensure the production of quality cocoa beans and that management would not spare any staff who would engage in corruption. Mr Gorke Sekyim, Managing Director of the Company, appealed to the workers to work assiduously to sustain the company.