Chamber of Mines Unhappy With Attacks on Mining Companies 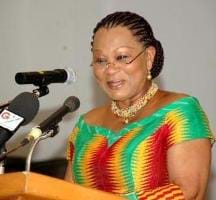 
Akyempim (W/R), Sept 21, GNA - Miss Joyce Aryee, the Chief Executive Officer (CEO) of the Ghana Chamber of Mines, has expressed her displeasure and worry over assault on workers of mining companies by illegal miners. She said such barbaric attacks had the tendency to discourage investors and it would impact negatively on the nation's economy. Miss Aryee appealed to National Security to take steps to stop this practice by the illegal miners (galamsey) before things got out of hand. She said this in a speech read on her behalf at the Zone One First Aid and Safety Competition for workers of Anglogold Ashanti, Golden Star Resources and Goldfields Ghana Limited at Akyempim. She said the competition aimed at testing the knowledge of the miners in First Aid and how to attend to injured workers in the course of duty. The CEO said: "a looming threat to the mining industry is illegal mining and constant attacks on workers of mining companies." "We have allowed that menace to fester and this has emboldened those illegal miners to cause havoc to the environment by polluting our water bodies with mercury and thus leaving large craters filled with water at the operations sites." Miss Aryee said some of the galamsey operators used cyanides in their operations thereby causing catastrophic damage to human beings, marine life and the environment and appealed to the mining companies to carry out Environmental Impact Assessment and Environmental Management Systems on the life cycle of miners. She said members of the Chamber would co-operate with the Environmental Protection Agency and the Inspectorate Division of the Minerals Commission to ensure that all incidents are remedied. Touching on the contribution of the extractive industry to the country's economy, Ms Aryee said in 2009the mining sector contributed GH¢319 million to the Internal Revenue Service (IRS). The sector has become the leading contributor to the IRS collections having improved from the third position in 2008. She said the minerals contributions to the gross export earnings was 48 per cent. Ms Aryee said as part of its corporate responsibilities, the sector contributed US$166 million to the host communities for funding projects. The District Chief Executive for the Mpohor Wassa East, Mr Anthony Bassaw, said the mining sector had contributed significantly towards the growth of the economy as well as providing jobs for the majority of the youth within their catchments areas. He appealed to the youth to shun galamsey operation and rather engage in alternative livelihood activities. He commended the organisers of the programme for initiating the competition and also urged the mining companies to collaborate with the Metropolitan, Municipal and District assemblies in their respective catchments areas to ensure smooth implementation of development programmes.