Blueprint For Development Out 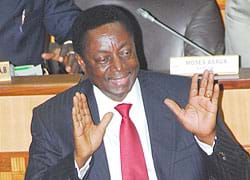 
The government has completed a new medium term development strategy to replace the Growth and Poverty Reduction Strategy (GPRSII) with which it hopes to accelerate growth. The Minister of Finance and Economic Planning, Dr Kwabena Duffour, who disclosed this to the Daily Graphic, said under the Ghana Shared Growth and Development Agenda, massive infrastructure and human resource development as well as agriculture would be among the growth drivers to create substantial employment. The Finance Minister's pronouncements came ahead of a Consultative Group (CG) meeting between the government and development partners which began in Accra Thursday. The CG forum would determine how best to strategically align external assistance with the country's development agenda and the budget. It will seek to discuss results, achievements and challenges in the country's development process, poverty reduction initiatives and resources needed to invest in the areas. Dr Duffour said oil and gas development projects, private sector development and the Information and Communications Technology (ICT) sub-sectors were the other areas that the document had earmarked to drive growth and create significant employment in the next three years. The development plan envisages that the economy would grow at an average rate of above eight per cent up to 2013, without compromising macroeconomic stability. The growth would be powered by agriculture which would grow above six per cent, as industry contributes an average of 10 per cent, with services coming in with above eight per cent growth. Dr Duffour said having achieved a remarkable stability amidst the payment of unexpected arrears, the government was now set to achieve an even more accelerated growth and development so as to create more job opportunities for the youth. He said the government would make a case for continued support from the Official Development Assistance (ODA) in spite of the pouring of oil in December, which together with the rebasing exercise being conducted to resize the country's Gross Domestic Product (GDP) could re-categorise the economy as middle income, which should depend less on ODA resources. "There is significant opportunity for fiscal space from oil and gas revenues for sustainable economic growth. However, we must appreciate that these revenues are unlikely to transform the country's status immediately. Ghana will still very much require the support of its development partners to achieve the 'Better Ghana' agenda," Dr Duffour told the Daily Graphic. The Finance Minister said the government's fiscal consolidation was on course as the net domestic financing, which shows the government's efforts locally to finance its expenditures, was doing better than projected. He said the Value Added Tax (VAT) Service and the Internal Revenues Service (IRS) were performing better than expected by the end of the first half, with the Customs, Excise and Preventive Service (CEPS) being the only domestic revenue agency slightly lagging behind its target. "Even with CEPS, the gap is narrowing and we hope they will also exceed their targets by the end of the year" Dr Duffour stated. Dr Duffour said the meeting would, among other things, discuss• the draft medium-term national development policy framework, the Growth and Development Agenda 2011-2013; the government's Position Paper, the Ghana Aid Policy and Strategy, which make a case for continued ODA assistance, as well as the development partner performance assessment framework and the National Report on the MDGs.