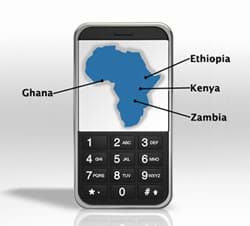 The number of active mobile subscriptions in Africa crossed the half-a-billion mark in the third quarter of this year, to reach 506 million at end-September, according to research by UK-based Informa Telecoms & Media. The report, published on the researcher’s website said at the end of the third quarter of this year, Africa accounted for 10% of the world’s mobile subscriptions and was one of the world’s fastest-growing regions – with the subscription numbers increasing 18% over the year to September. It said mobile penetration rate on the continent is still low and demand for new services, such as mobile Internet access has increased the need for telecoms connectivity. “Although the rate of growth in mobile subscriptions in Africa will slow as markets mature, the continent continues to offer great opportunities for investors in the voice segment in under-penetrated markets and also in the non-voice segments with mobile broadband and mobile-money services taking off,” the report said. It forecasts that by 2015, there will be 265 million mobile broadband subscriptions in Africa, a huge increase from the current figure of about 12 million, and that will account for 31.5% of the total of 842 million mobile subscriptions that the continent will have in the next five years. “There will be almost 360 million users of mobile-money services on the continent by 2014,” the report said The report noted that the mobile revolution that has swept through Africa has made mobile telephony widely available but there are still substantial under-served markets – in rural areas the rate of mobile penetration is typically below 10%, for example. The landing of a series of new submarine cables on both the East and West coasts of Africa over the past 18 months has given the continent a good level of international connectivity for the first time, and has greatly expanded the opportunities for data services, it said. However, terrestrial backhaul threatens to become the next bottle-neck, and must be extended if the benefits of the new connectivity are to be made widely available and in particular reach rural communities and countries in the interior of the continent. This concern pointed out in the report confirms the fears of telecom experts at the Telecom World Africa conference in Cape Town last year, that the challenge Africa faces now is how to make the more people benefit from the abundant submarine cables and the broadband opportunities they bring. The rate of household broadband penetration in Africa was just 2.5% in the first quarter of 2010, so African broadband has a long way to go if it is to emulate the mobile revolution that has already swept through much of the continent, the report said. Meanwhile, the past year has seen a big change in the line-up of key players in the African mobile market, with the sale of Zain Africa – one of the biggest pan-African players with 15 operations on the continent – to Bharti Airtel of India. Airtel has hired IBM to provide and manage the technology base of its operations in Africa, and that is expected to revolutionize communications on the continent. Airtel has also set out major network-expansion plans in Africa. The report also noted that Nigeria remains the largest mobile market, accounting for 16% of the continent’s mobile subscriptions, with Egypt and South Africa coming second and third. It says Nigeria, Egypt, Morocco, Tanzania and Zimbabwe together accounted for 48% of the 54 million net additions to Africa’s mobile subscription market over the nine months to September. Over the coming five years, the strongest growth rates in mobile subscriptions are expected to be recorded mainly in East and Central African markets, with Ethiopia, DR Congo, Eritrea and Madagascar forecast to see mobile subscription numbers increase by more than 100% by 2015. Africa’s first mobile network was launched in Tunisia in 1985, so 2010 marks the twenty-fifth anniversary of mobile telephony on the continent.

Cybercriminals are using Google reCAPTCHA to hide their phishing attacks 346