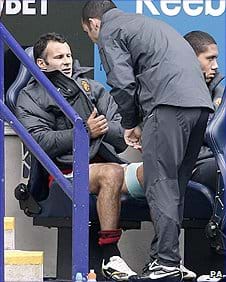 
Manchester United manager Sir Alex Ferguson said Ryan Giggs will be out for two weeks after the winger suffered a hamstring injury at Bolton. Giggs went off in Sunday's 2-2 draw and is set to miss Wednesday's Champions League tie at Valencia and Saturday's Premier League game at Sunderland. "It is a hamstring and I am afraid he will be out for a couple of weeks," Ferguson told ESPN. Wayne Rooney has an ankle problem but is expected to face Valencia. Rooney was substituted after 61 minutes at the Reebok Stadium as United twice went behind to goals from Zat Knight and Martin Petrov but earned a point courtesy of efforts from Nani and Michael Owen. "Wayne Rooney had a bit of a knock," said United assistant manager Mike Phelan. "He has a little issue with his ankle. We don't know how serious. "We will have a look in the morning but we think he will be OK for Wednesday. "He has been playing with it for a couple of weeks now and during the game we decided he wasn't getting into the areas we wanted and he wasn't getting chances, so we had to change it." Ferguson's side failed to capitalise on Premier League leaders Chelsea losing on Saturday at Manchester City, although the Scot drew solace in his team's character to twice come back to level at Bolton. "In the first half we should have done better but we did well to come from behind," he stated. "The second half was very even. Bolton were a real handful and our chances were reduced but we must take credit for coming back again. It shows a bit of character." Bolton manager Owen Coyle praised the commitment of his players as they provided impressive evidence of the progress they are making under their manager. "I thought there were periods in the game when we were worthy of all three points but I think you have to accept the quality Manchester United have," said Coyle. "At 2-2 we kept pushing on as we thought we could win and it speaks volumes for the players and their character that they believed they could win. There are a lot of positives for us to take. "Every one of my players gave me every ounce of effort and they showed a lot of quality on the ball as well."