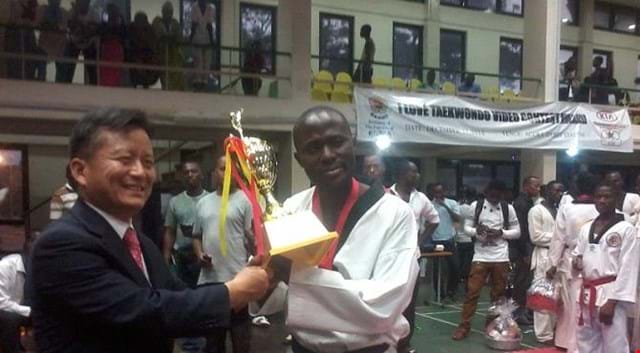 When a dream comes face-to-face with an obstacle, it takes a lot of determination to pick back the pieces and move on, especially when everything appears to have come to an end.

At a point in his life, Sharon Akwei, the first Ghanaian Para-Taekwondo champion and medalist thought his dream of becoming one of the greatest Martial Artist Ghana has ever produced, had come to an end when he was involved in an accident that hospitalized him at the 37 Military Hospital for a whole year.

Prior to that accident that turned out to be a blessing in disguise, Sharon had started Martial Arts at age 7 and had developed an interest in watching moves and techniques displayed by some of the greatest stars like Jackie Chan, Jet Li, Bruce Lee and the rest.

He always tried practicing some of the moves and techniques they displayed so well that, when he met Master Sesi Dzakpasu, a taekwondo black belt and trainer at age 9, it was a matter of a short time for him to introduce him to taekwondo.

“He asked me of what I wanted to do and I told him I wanted to become a world champion for Ghana so he motivated me. At age 12 I started fighting in the national junior championship and inter clubs levels in Ghana and was never defeated,” Sharon vividly recollects.

But as fate may have it, at age 23 he was involved in an accident that kept him on admission at the 37 Military Hospital for almost a year. Whiles on admission Master Sesi kept on encouraging him and gave him inspiration.

Due to an injury in the left hand that made it virtually numb, he thought it was all over for the sport. However, whilst contemplating going into some other activity, Master Sesi assured him all was not lost and that he could still participate in Para-Taekwondo in spite of his disability.

It was difficult to pick up the pieces but, as Sharon put, “I still had to live my dreams”. Nine years after the accident he became the first Ghanaian World Bronze Medalist, when he placed third at the 5th World Para Taekwondo Championship in Moscow in 2014 the only highest medal ever recorded in Ghana’s history since the sport became a national sport in 1980. In the same year he was adjudged the SWAG Taekwondo Player of the year and Promising Star of the year.

Sharon is imparting his skills in school children across the country with special training sessions in selected schools. He believes the training would instill discipline in the children and build them into responsible adults.

In 2015 he organized a national taekwondo competition for children from selected schools, bringing together about 70 children to compete for laurels.

His dream is to raise more taekwondo stars in the country through the training sessions and also to encourage and train Persons with Disability (PWDs) to get into the sport and compete for Ghana in international tournaments.

He has already started training some PWDs who have taken part in some competitions in the name of Ghana.

His greatest challenge is funding and he wants to appeal to the corporate world and philanthropists to come to his aid to be able to participate in competitions lined up for him as well as train those with disability and children.

He is of praise and appreciation to Master Sesi Dzakpasu, the President of the Ghana Taekwondo Federation, among others, for their support.