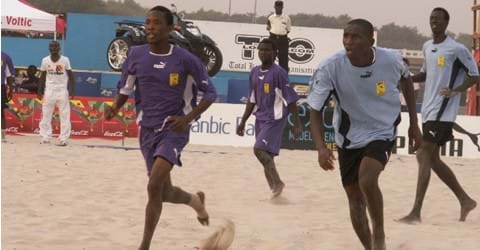 
Week two of the Cal Bank Beach Soccer Premier League witnessed exciting fixtures as teams from the coasts engaged each other to thrill fans at the La Beach Soccer Arena in Accra. The Volta-Havedzi Mighty Warriors came from two goals down to beat Senya Bereku Sharks 5-2 in a sensational encounter to go top of the league table. Senya Bereku Sharks made a terrific start when Paul Nyarko dribbled and slotted the opener beyond the Warriors keeper. Seconds later, Joseph Otchere doubled the Senya side's lead. Warriors who travelled from Keta earlier that morning gradually warmed themselves into the game and managed to pull a goal back when Kofi Aziz scored with a powerful shot before the first quarter break. In the second period Jerry Eglu equalised for Warriors before Benedict Kabu put the Warriors in front. Kofi Aziz then added two goals in the third period to complete his hat-trick. In the other encounter, local outfit Layoca thrashed Osu Dolphins 6-0 to redeem themselves after a humiliating 8-3 loss on the opening day. Captain of the side, Nii Bonney Laaye led by example as he scored the first goal for his side following a neat build up. Albert Sowah then doubled Layoca's lead with a tap in after Dolphins keeper Komla Dodzi spilled a shot. The keeper was swiftly replaced after the second goal but the change did not save Dolphins from drowning as they conceded four more goals. Two from Farouk Lartey and a goal each from Joshua Adjei and Daniel Adjei settled the game. The victory took Layoca from the bottom of the table to fifth place. Another thrilling fixture ended in favour of La based team Wuo Gb?? as they beat Tegbi Youth 4-3 with Wuo Gb?? striker Richard Osa scoring all four goals sending his goal tally to seven in two matches following his remarkable hatrick a week earlier. Osa made his intentions known after he put his side in front after just two minutes of play in the first quarter. The Tegbi Youth coach then made a quick substitution which resulted in a goal for his side as substitute Emmanuel Kumasenu scored with a fierce long range shot. The introduction of Kumasenu changed the tide of the game as Tegbi Youth applied more pressure and got the equaliser through Anthonio Micheal. Kumasenu then put Tegbi Youth in front from a penalty kick when a Wuo Gb?? defender handled the ball in the final third of the pitch. The Voltarians looked set to run away with victory only for Richard Osa to rewrite the script. After his equaliser for Wuo Gb?? with the game heading for draw Osa contrived to score his fourth, a last minute winner from a free kick when he was brought down by Daniel Nyardror of Tegbi Youth. The breathless match finally ended 4-3. Glamour The glamour match between Ada Assurance and East Legon Sharks was a controversial encounter. Assurance were looking for their first win in the league and attacked from the start of the game. Ada deservedly took the lead in the 10th minute of the first quarter before a second quarter goal by Evans Okomko made it 2-0. Adams Edwards of East Legon Sharks was shown the first red card of the competition for unsporting behaviour. In the third period, Robert Lamptey pulled a goal back for East Legon Sharks from the penalty spot. The sharks found it very difficult to break the defence of Assurance as captain Divine Sappor stood firm. Nathaniel Abaya increased the score to 3-1 moments before the Sharks Robert Lamptey was sent off after receiving a second yellow card. Sharks goalkeeper gifted Assurance a penalty when he grabbed an Assurance player and threw him in the sand. His actions merited him a straight red card as he became the third Sharks player to be sent off in the game. Evans Okomko stepped up and scored from the penalty spot making the final score 4-1 to Ada Assurance. East Legon Sharks post match protests were waved away by officials. The first draw of the league came in a tough and cagey fixture as Keta Sunset Sports came twice from behind to draw 2-2 with Dansoman Beach Soccer Club. Dansoman forward Samuel Entsiel put his side ahead in the 7th minute of the first period. Newlove Doe of Sunset Sports equalised four minutes later, only for Entsiel to put his side ahead once more in the second quarter. In the final period, Micheal Sema equalized for Keta Sunset Sports and although the two sides fought on the game could not produce a winner.