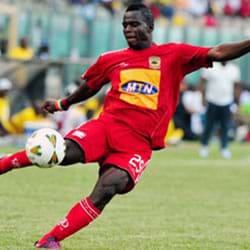 Asante Kotoko will be eyeing to remain tops when they welcome Berekum Chelsea to the Baba Yara Stadium on Wednesday in a match-day-11 game. The Porcupine Warriors have enjoyed a good start to the season in the league and would be seeking to maintain their position as rivals, Hearts of Oak, All Stars and their Wednesday opponents, Chelsea pile the pressure on them. Victory for Kotoko would move them three points clear. Kotoko defender Awal Mohammed is confident the Porcupine Warriors can revenge their loss last season to Chelsea in Kumasi. Kotoko lead the Glo league standings on goal difference ahead of Hearts of Oak and two clear of Wednesday opponents Chelsea. The two meet in Kumasi after Kotoko's trip to Tanzania and the Porcupine Warriors are keen to get back at Chelsea following their win in Kumasi last season. "Even when we were in Tanzania we were thinking about that game. Chelsea is a very good side but we have played well this season and in Kumasi we will win," the Kotoko defender said. Having overcome a torrid time, Chelsea under Hans Van der Plyum have turned the corner as they hope to go top of the standings for the first time this season if they manage a win in Kumasi. Making it four wins in six still leaves them two points off Kotoko, but would at least give them hope of challenging for the summit.