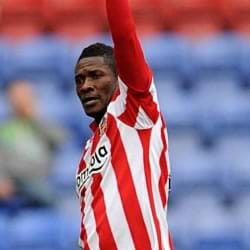 Asamoah Gyan could be handed a start for Sunderland against Blackburn on Monday in the Premiership as the Black Cats sweat on the injury front. Sunderland boss Steve Bruce says he would have no hesitation in handing the Ghana striker that role should Darren Bent fail to recover in time. Bent withdrew from the England squad with a groin injury on Monday and now remains a doubt. "That's the reason why we brought Gyan in," Bruce told the BBC. "If Bent goes down then we've got somebody of that quality to bring in, which for a manager is fantastic." Bruce added: "Gyan's come in and judging by the way he's trained the last couple of days he's far better, he's happier in his surroundings now, and come to grips with it. "He's done a lot of physical work, which he needed, which has helped him as well."