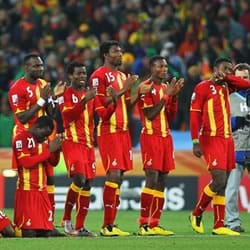 
Ghana are among the top 20 sides in the world on the FIFA/Coca-Cola World Ranking, climbing three places from the previous ranking. The latest ranking released today by FIFA puts the Black Stars at the 20th spot. The 2010 World Cup quarter-finalists reaped 15 points to send their build up to 889. Ghana are still Africa's second best side behind Egypt. Ivory Coast, Nigeria, Algeria and Cameroon trail the Black Stars in that order on the continental ranking table. In the overall rankings, world champions Spain still hold onto top spot despite losing 59 points. And they are followed by the Netherlands with Germany edging Brazil to the third place. The significant changes on the table have been influenced by the results of the 159 “A” international matches played over the last five weeks with both the 2012 African Cup of Nations and Euro 2012 qualifiers carrying most points.