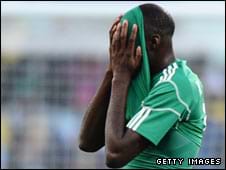 Eagles Warn Kaita | Dont Go Back To Nigeria Website
THE Super Eagles teammates of Sani Kaita have asked the Russia-based midfielder to return directly to his base in Europe rather than head for Nigeria following threats to his life by some angry fans on account of his red card against Greece in a Group B match last week. Kaita’s red card opened the way for Greece to fight back from a goal down and win 2-1 to throw Group B wide open, before South Korea finally edged the three-horse race to join group leader, Argentina, in the knockout stage of the World Cup on the final day of first round action. Kaita received death threats to his email following this dramatic red card, forcing the Nigeria Football Federation (NFF) to notify FIFA. “It’s too dangerous for Kaita to return to Nigeria and that is why most of us told him to head straight to Europe now that we have been knocked out of the World Cup,” warned one of the most senior players in the Eagles who is based in England.” “We may all be treating these threats lightly, but if something bad happens to him now, we will all be sorry that he did not take necessary precaution,” added another player. Kaita himself has insisted that as a Muslim, his religion teaches him that only God has control over his life and that he was not scared of the death threats.