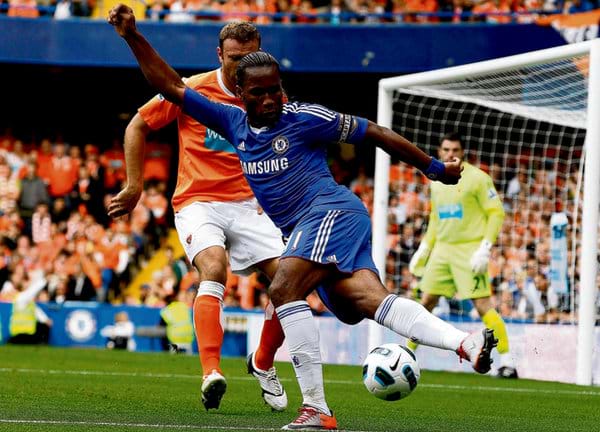 Another win and another rout but for Chelsea the hard work begins now. The team travel to Manchester City on Saturday having blitzed their way through an opening set of fixtures which proved as comfortable for them as had first appeared. This latest game was over as a contest by half-time but ahead of the visit to Eastlands, and the arrival of Arsenal here on 3 October, it will have done the hosts no harm to have endured some anxiety after the interval. The champions, after all, could be forgiven for believing in their own invincibility having now won six consecutive matches, scoring 25 goals in the process. But Blackpool's admirable if not surprising decision to maintain an emphasis on attacking despite being 4-0 down after the first 45 minutes here reminded Chelsea of their vulnerability. That was acknowledged by the manager, Carlo Ancelotti, after his side nearly conceded a goal on three occasions. The closest of those was a low drive from DJ Campbell on 49 minutes that had to be hacked off the line by Branislav Ivanovic. There then followed a volley from Luke Varney that had power but little direction before, on 61 minutes, the substitute Gary Taylor-Fletcher hit a curling shot which Petr Cech had to stretch fully to push over the bar. A much-satisfied crowd was suddenly fearing trouble ahead. "Blackpool showed a good reaction after the first half and had good chances to score," said Ancelotti. "But this happened because we were not playing so well. We did not have fantastic play like in the first half. During that period it was a pleasure to watch my team play." That was a sentiment shared by Florent Malouda, who spoke of his team-mates "enjoying" the manner in which they swept aside another set of opponents. For the Frenchman in particular it proved a stellar day as he scored the sixth and seventh goals of the season so far. His first came on 12 minutes after Didier Drogba, outstanding here having been rested for the midweek win over MSK Zilina in the Champions League, held off the Blackpool right-back Stephen Crainey before sweeping a cross towards the back post where the 30-year-old was waiting to convert a side-footed shot. Malouda's second arrived four minutes before half-time, a drilled left-footed drive that came from Salomon Kalou's precise cut-back. That made it 4-0 and destroyed any faint hopes Blackpool had of recreating the wins they had secured at Wigan Athletic and Newcastle United following their promotion to the Premier League. Even with the endeavour they showed after the interval, defeat was inevitable. "Some people have take us for granted, but the champions didn't, their movement throughout was different to what I've seen before and they've got some fantastic players here," said Ian Holloway, the Blackpool manager. "We're light-years away from teams like Chelsea but my challenge is to get us closer to them and I'm glad to be part of it." That challenge, Holloway insisted, will continue to be underlined by a policy of adventure. It had been fascinating before kick-off to wonder if he would stick with the 4-3-3 formation that has inspired those wins at the DW Stadium and St James's Park but also played a part in the 6-0 defeat to Arsenal in between. As it was, Blackpool began in a 4-3-2-1 system which encouraged Elliot Grandin and Varney to stay wide and support the lone striker Campbell as often as possible. Indeed it was Varney who had Blackpool's best effort of the first half, a long-range drive on 17 minutes that forced Cech to make a low save. By then, however, Chelsea had established a strong lead with Kalou opening the scoring with a close-range shot after Ivanovic – who was playing at centre-back due to John Terry not recovering from the rib injury he picked up during last week's win at West Ham United – had flicked Drogba's corner into his path. The striker scored Chelsea's third on 30 minutes after collecting a pass from Ashley Cole, whose tormenting of the right-back Neal Eardley was such that the full-back had to be substituted for his own good at half-time. The speed with which Chelsea pour forward, allied to the robustness shown by the likes of Michael Essien, suggests they would be in first place even if their opponents to date had been sterner. They will also travel to City with Frank Lampard restored to the team after Ancelotti confirmed the midfielder is training again following a groin injury. The Italian recognised that game as a "test" but baulked at suggestions that his side has had it easy so far, as did Malouda. "People do not want to give us credit for what we have done so far," said the player. "But we know we can achieve great performances against big teams so we are looking forward to the City game."