Unrest As Bemuhemaa Is Enstooled | Akropong 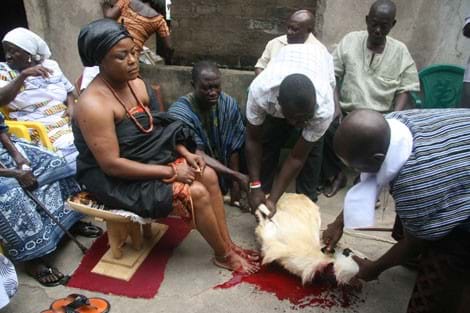 Traditional rites being performed during the enstoolment ceremony


A 47 year old nurse, formerly based in Oklahoma City in the United States of America, Florence Berko was on Tuesday, September 28, enstooled as the Bemuhemaa of the Akwapim-Akropong Traditional Area, but not without infraction. The Bemuhene, Nana Kwame Afari Bampoe II and a few of other indigenes were said not to be in support of the installation. Reports say there was a free for fight and sporadic gunshots during and after the ceremony with several people openly brandishing clubs and machetes. Peace FM’s Reporter Kwesi Agyeman, who was at the scene, said the fracas came about as a result of claims by the Bemuhene, Nana Kwame Afari Bampoe II and his group that the installation process adopted by the Traditional Council of the town was flawed. They allegedly fired rounds of live bullets and burnt lorry tires at the precincts of the palace to register their disapproval of the ceremonial rites. The situation compelled visitors who had come to witness the traditional ceremony to flee helter-skelter from the looming danger. But the arrival of a heavy police cum military team somehow helped calm the situation. According to Kwesi Agyeman, the Bemuhene’s group was of the view that the problem needed to be resolved before they could go on to install Florence Berko as the Bemuhemaa, but the traditional council did not heed their concerns. They further added that the ‘Bemuhene’ should have been present during the performance of traditional rites but because he did not agree to the installation, he failed to attend. But the kingmakers, backed by the blessings of the Akwapimhene, Nana Addo Dankwah III, slaughtered a white sheep on the feet of Mrs. Florence Berko to signify her enstoolment as the Bemuhemaa. In a related development, a District Security Council meeting was held soon after the installation to address the disturbances that occurred. Reports say the kingmakers were invited by the Security Council, but the outcome was not yet known as at press time.