Trial Of Girlfriend Who Unzipped and Robbed Ex-MP | Investigator Testifies 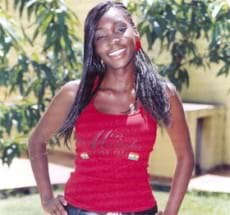 The Investigator in the case of three people standing trial for allegedly conspiring to rob J.B. Danquah Adu, Ex-MP for Abuakwa North and Deputy Minister of Women and Children’s Affairs under the erstwhile Kufuor administration on Thursday appeared before an Accra Fast Track High Court to give testimony. Sergeant Yaw Gyan of the East Legon Police in Accra told the court presided over by Justice Mustapha Habib Logoh that when he got to the crime scene he saw the Ex-MP’s pair of shoes, two mobile phones, car keys and two kitchen knives among others. Narteley Nettey Yirenkyiwaa aka Awura Ama, 24, the ex-Minister’s estranged girlfriend is standing trial together with Charles Antwi and Nana Yaw Ampaw; the police say the three conspired to rob the JB at the East Legon apartment of the lady on August 26, 2010. The three have pleaded not guilty to three counts of conspiracy, causing harm and robbery and have been in police custody since August 2010. Led in evidence by Paul Asibi Abariga a State Attorney, Sgt. Gyan who is the seventh Prosecution Witness (PW7) told the court that when he led a team of investigators to the apartment of Yirenkyiwaa at American House in East Legon he saw blood stains on the floor of the room. During cross examination by Kwabena Addo Attuah counsel for Yirenkyiwaa and CK Mintah counsel for Antwi and Ampaw respectively, Sgt. Gyan denied that saw the Ex-MP’s pair of trousers which is a bone of contention between the prosecution and defense counsel in Yirenkyiwaa’s room. Counsel: When did you visit the crime scene? Witness: I was there in the afternoon of August 25, 2010. Counsel: Are you aware that the alleged incident happened on August 26 and that it is not possible for you to have visited the apartment on August 25 as you are saying? Witness: Sorry my Lord. That was a mistake. I went there on August 26. Counsel: You are not a credible witness Witness: I am credible. Counsel: When visiting the scene, who did you go with? Witness: Myself, A1 (Yirenkyiwaa), A2 (Antwi) and officers from CID Headquarters. Counsel: I suggest to you that you went there with other persons apart from the ones you have just mentioned Witness: I was not there with other persons apart from the ones you have just mentioned. Counsel: The complainant’s (JB) brother called Twum Barimah was there and you introduced him to the accused as the Police Chief of East Legon. Witness: No my Lord. I did not do that. Counsel: Did the accused go into the room with you? Witness: Yes, my Lord Counsel: I put it to you that you went into the room, ransacked the place with the complainant’s brother before bringing the accused persons inside. Witness: No, we went there with them. Counsel: I am further putting it to you that you went inside first to arrange the place before bringing the accused persons. Witness: No, my Lord. Sgt. Gyan told the court that he was not the one who preferred the charges against the accused persons but said he took their caution statements. Immediately the witness was discharged by the court, Mr. Abariga moved an application to have the accused person remanded into prison custody, claiming the police was finding it difficult to bring them to court from the Police Headquarters. Messrs Attuah and Mintah vehemently opposed the application questioning the rationale in moving their clients from the Police Headquarters which is closer to the courts to Nsawam Prisons which is far away. Justice Logoh dismissed the application, describing it as frivolous. The facts of the case are that on the morning of August 26 this year, Yirenkyiwaa allegedly called JB to meet her at Protea Hotel. When they met, she asked for financial help from him and they agreed to meet later at her house. When JB got to her house, he met Yirenkyiwaa outside, who took him into the house. They then proceeded to her bedroom where she allegedly undressed him. The prosecution said when she had done this, the other two accused persons came out of the bathroom where they were hiding and started taking pictures, after which they attacked the complainant with a knife and took his pair of trousers which contained GH¢1000. The struggling and shouting by the complainant in the room attracted the watchman at the house who together with some other tenants arrested Yirenkyiwaa and Antwi but Ampong escaped and was arrested later. Sitting continues on March 1, 2011.