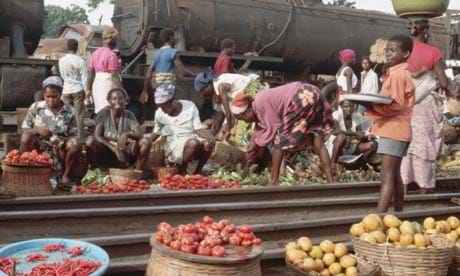 Girls can be trafficked to be market porters


Ayi was fifteen when her parents sold her. She was sent to the Ghanaian capital of Accra, where her tasks included carrying heavy loads for market women. After a year she was forced to work as a prostitute. "I was given drugs and received clients day and night," she says. Police were told of her plight by an NGO, and they arrested two men who were suspected of having trafficked her. That NGO, the Centre for the Initiative Against Human Trafficking (CIAHT), helped Ayi back to her home town of Tamale, in the north of Ghana. Ayi's story is far from unique, says Abdulai Danaah, CIAHT's national co-ordinator. Those trafficked can be subjected to sexual exploitation and forced labour. Although numbers are difficult to establish, Ghana's immigration services estimated in 2008-2009 there were some 12,000 victims of human trafficking. Parents sell their children, sometimes for as little as $230, because of extreme poverty, Danaah says. They are often deceived into thinking their children will be treated well. Tamale, where CIAHT is based, is the capital of northern Ghana. The region is the poorest in the country. The challenge of rebuilding a life after being trafficked is great. Some of the women are ill and have sexually transmitted diseases. Research conducted in 2003 in nine countries by Melissa Farley, an American clinical psychologist and researcher, found high rates of violence, post-traumatic stress disorder and depression. Many of these trafficked women have no formal skills and fall back into poverty. The psychological effects of their experiences can make it difficult to reintegrate into society. That's where CIAHT comes in. The organisation teaches skills for employment to those who have been trafficked and provides groups with loans to help them get businesses up and running. It also gives medical and psychological assistance. Ayi lived in a rescue house funded by CIAHT and received an hour of counselling, twice a week, for six months from a local priest. "It is crucial not to reintegrate victims of trafficking back into society too quickly," Danaah says. "A key part of the counselling is to improve the self-image of the women so they feel they can be part of and contribute to their communities. It is also key that once the businesses are set up and running CIAHT continues long-term, low-level involvement to make sure that the ventures continue to be successful and the women feel supported." Peer counselling also plays a part. One government official in Foushegu, a community outside Tamale, has been instrumental in getting such services in place, albeit on a small scale. "In the community of Foushegu the local church contacted me as it identified the need for counselling for victims of human trafficking," Prince Mohamed said. "We have set up peer counselling workshops to encourage people who have been trafficked to share their experiences and to support each other. The workshops also mean that the wider community is educated about the dangers of trafficking. The community really benefits from the discussions and have requested more sessions." There's no clinical psychologist in Tamale to assist. Counselling services, when available, can be offered by local NGOs in collaboration with government and religious leaders, and they vary in quality and quantity. A lack of funding from Accra is the biggest constraint to greater care, and an issue that bedevils CIAHT. Other factors at play include controversy over what kind of counselling should be offered. The traditional Ghanian definition of counselling can differ greatly from western models. In the west, mental health counselling is offered by someone in the discipline with a qualification. This simply isn't applicable in most African countries, including Ghana, where trained professionals are lacking. In traditional communities within Tamale, there is some distrust of western models. Some believe that psychology is about mind reading and brain washing. And there's a wider challenge of the stigmatisation of mental illness. In some cases, people with mental health issues have been accused of witchcraft and forced out of their communities. Traditional methods of care are still practised, says Danaah. These can include inspirational stories of triumph over adversity or the involvement of a spiritual leader to influence thinking. A traditional medicine for mental health, made by boiling the roots of a local tree, can also be offered. Danaah says western counselling must be adapted to the local context and fused with traditional methods if it's to make a difference. "The social context means that the western model of an individual being counselled is often simply not acceptable. For example in some traditional communities women must be counselled with their husband or father present. Women cannot counsel men and people cannot be counselled by someone younger than themselves," he says. Still, the desire for help is strong. Ori Schwartzman, an Israeli psychiatrist, has established, and volunteers his time, in a mobile psychiatric clinic that visits remote southern Ghana. "In my time, I haven't come across a single [psychologist] in the Ashanti region. People would walk for weeks and arrive at the mobile clinic with their only directions being that the clinic was under the sacred baobab tree." Though trained in western psychiatry, Schwartzman believes in working with local cultures. "I was one treatment option out of many, together with magicians, priests. They came to me as they heard that there was a white doctor who could exorcise demons by means of coloured pills," he says. Back in Tamale, progress to assist the victims of human trafficking is slow. Still, at least there's progress. Ayi has returned home. CIAHT worked with her family, as part of a micro-credit loan program, on a project that involved processing shea-nut butter. Ayi, now aged 17, finished school and went on to further education, completing a course at a polytechnic and earning a diploma in marketing