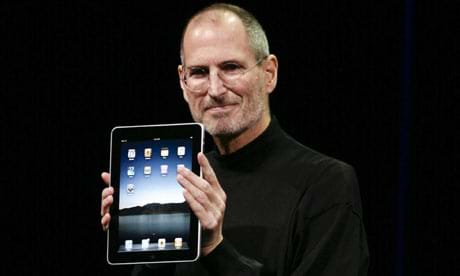 
Steve Jobs, the mastermind behind Apple's iPhone, iPad, iPod, iMac and iTunes, has died, Apple said. Jobs was 56. Jobs died "peacefully," surrounded by family members, his family said in a statement. Neither Jobs' family nor Apple revealed where he died or from what cause, though in recent years Jobs had fought a form of pancreatic cancer and had a liver transplant. "We are deeply saddened to announce that Steve Jobs passed away today," read a statement by Apple's board of directors. "Steve's brilliance, passion and energy were the source of countless innovations that enrich and improve all of our lives. The world is immeasurably better because of Steve. His greatest love was for his wife, Laurene, and his family. Our hearts go out to them and to all who were touched by his extraordinary gifts." As Jobs' death was announced, the homepage of Apple's website switched to a full-page image of Jobs with the text, "Steve Jobs 1955-2011." Clicking on the image revealed additional text that was credited to current Apple CEO Tim Cook in a separate memo to Apple employees. "Apple has lost a visionary and creative genius, and the world has lost an amazing human being," the text read. "Those of us who have been fortunate enough to know and work with Steve have lost a dear friend and an inspiring mentor. Steve leaves behind a company that only he could have built, and his spirit will forever be the foundation of Apple." Reaction to Jobs' death came from far and wide - even from the White House. "Michelle and I are saddened to learn of the passing of Steve Jobs," President Obama said in a written statement. "Steve was among the greatest of American innovators - brave enough to think differently, bold enough to believe he could change the world, and talented enough to do it." Jobs co-founded Apple Computer in 1976 and, with his childhood friend Steve Wozniak, marketed what was considered the world's first personal computer, the Apple II. Shortly after learning of Jobs' death, Wozniak told ABC News, "I'm shocked and disturbed." Later, on ABC News' "Nightline," he said it was hard to imagine, in some ways, how the world would move forward without Jobs. "You get shocked when people you know die," Wozniak said. "And this was closer to when John Lennon died, or JFK or Martin Luther King." Industry watchers called Jobs a master innovator - perhaps on a par with Thomas Edison - changing the worlds of computing, recorded music and communications. Click Here for Pictures: Steve Jobs Through the Years Jobs' rivals in the development of personal computers, Microsoft co-founders Bill Gates and Paul Allen, immediately reacted to his death and highlighted his importance to their industry. Allen called him "a unique tech pioneer and auteur who knew how to make amazingly great products." Gates extended his condolences and noted in a written statement that he and Jobs "have been colleagues, competitors and friends over the course of more than half our lives." "The world rarely sees someone who has had the profound impact Steve has had, the effects of which will be felt for many generations to come," Gates added. "For those of us lucky enough to get to work with him, it's been an insanely great honor. I will miss Steve immensely." A more recent contemporary in the tech world, Facebook founder Mark Zuckerberg, also weighed in with a statement on Jobs. "Steve, thank you for being a mentor and a friend," it read. "Thanks for showing that what you build can change the world. I will miss you." Jobs continued to innovate in recent years even as he battled severe health problems that prompted leaves of absence from Apple. In 2004, he beat back an unusual form of pancreatic cancer, and in 2009 he was forced to get a liver transplant. After several years of failing health, Jobs announced on Aug. 24, 2011 that he was stepping down as Apple's chief executive. "I have always said if there ever came a day when I could no longer meet my duties and expectations as Apple's CEO, I would be the first to let you know," Jobs wrote in his letter of resignation. "Unfortunately, that day has come." Nevertheless, he remained as chairman of the corporation, a new position created just for him.