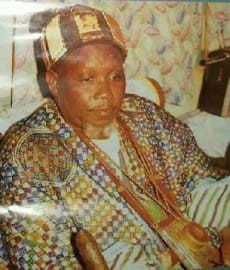 Defence Counsel in the Ya Na trial, on Monday September 27, tendered in evidence the four volumes of the Wuako Commission of Enquiry proceedings to the Fast Track High Court hearing the case. The defence was made to tender the document when Mr. Philip Addison, lead counsel for the accused persons was cross-examined Imana Saibu, the third Prosecution Witness by making certain references to the document. Ms Gertrude Aikins, Director of Public Prosecution raised objection to the reference to the document by the defence since they have not made known the source. Mr. Addison rose to his feet and accused the Prosecution of putting impediments on its way when it attempted to tender the document at the last sitting. The court at its last sitting ordered the Defence to seek authentication of the document, which it claimed were proceedings from the Wuako Commission. The court's ruling followed a similar objection raised by Mr. Anthony Rexford Wiredu, a Principal State Attorney, that the Defence cannot use the document to cross-examine the third Prosecution Witness because the document have not been validated by the rightful people. Fourteen persons are on trial for their alleged involvement in the assassination of Ya-Na Yakubu Andani II, the overlord of Dagbon, and 30 others in March 2002. They have all pleaded not guilty to the charges of conspiracy to murder and murder. The accused persons are; Mohammed Habib Tijani, Former Yendi District Chief Executive; Iddrisu Iddi, 76; Alhaji Baba Iddrisu Abdulai, 54; Kwame Alhassan, 53; and Mohammadu Abdulai, 57. The others are Saibu Mohammed, 34; Alhassan Mohammed Briamah, 40; Alhassan Ibrahim; Mohammed Mustapha and Sani Moro. The rest are Yakubu Usifu; Ahmed Abukari; Abdul Razak Usifu and Alhassan Braimah. One Zakaria Forest, the man alleged to have decapitated the head and hands of the Ya Na is at large. Mr. Justice E.K Ayebi, the trial judge in a new ruling on the matter said the court would admit the four copies of the Wuako Commission proceedings because defence have complied with the evidence of the Court Act. He also ordered that the court registrar should make photocopies of four of the document to prosecution to enable them cross-check with the defence's copy. Mr. Justice Ayebi said the Wuako Commission's work was relevant to the trial and as such everything must be done to ensure justice and fairness. During cross-examination, Saibu refuted claims by the defence that he was one of Ya Na's warriors who were brought from Tamale to fight, hence his refusal to go his father's house when he arrived in Yendi on March 25, 2002. "I am not a warrior and did not know how to use the gun, let alone attack the Abudus. He said he was sent to Yendi to present a satellite dish to Alhassan Andani, one of Ya- Na’s men who was his schoolmate in Tamale. Saibu said during his stay in the palace he did not see the departure of the Ya- Na's wives and children. He said the people that were with the Ya- Na when the firing became intensive on the palace was his elders and few young men whom he named as Iddrisu Muntawakil, Bashiru Red, Alhassan Andani and Alhassan Yakubu and not the warriors claimed by the defence. Saibu said while he was escaping from the palace he was shot by Abudus in the thigh, groin and buttocks but managed to hide himself at the Palace mausoleum where he saw Zakaria Forest, Sani Moro and Mustapha Mohammed decapitating the Ya- Na. The facts presented by the prosecution was that sometime in March 2002, the Ya-Na and some of his elders were killed following a clash between the two royal gates in Dagbon - Abudus and Andanis. After the clash, Idrissu Gyamfo and Yidana Sugri were arrested and prosecuted for the alleged murder but were acquitted and discharged. The government in a fresh attempt to find the murderers conducted a dawn swoop at Yendi during, which 41 persons were rounded up. After screening them in Bimbilla, 33 were granted self-recognizance bail, while the rest were taken to Accra. Subsequently others were arrested and were arraigned. The case has been adjourned to September 28, 2010.