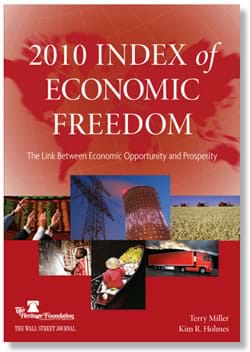 Ghana’s economic freedom score is 60.2, making its economy the 87th freest in the 2010 Index. Its overall score is 2.1 points higher than last year due to improvements in five of the 10 economic freedoms, including freedom from corruption and trade freedom. Ghana is ranked 8th out of 46 countries in the Sub-Saharan Africa region, and its overall score is above the world average. Prudent macroeconomic policies and structural reforms have enabled Ghana to achieve average growth of over 6 percent during the past five years. Many state-owned or state-controlled enterprises that the government identified for privatization in 2007 have been divested. An expanding private sector, macroeconomic stability, and financial-sector reform have contributed to relatively steady expansion and poverty reduction. As a result, Ghana for the first time has achieved the status of “moderately free.” Ghana’s overall economic freedom is mainly curtailed by an ineffective judicial system that remains vulnerable to political influence. Corruption and the weak rule of law undermine Ghana’s capacity to attract more foreign investment. [b]Background[/b] In 1957, Ghana was the first Sub-Saharan African nation to achieve independence from a colonial power. It has been a stable democracy since 1992. Long-time opposition party candidate John Atta Mills was elected president in December 2008 by the narrowest margin in African history. Ghana is rich in natural resources, including gold, diamonds, manganese ore, and bauxite. The industrial sector, at about 30 percent of GDP in 2007, is somewhat more developed than those of many other African countries, but agriculture is the key economic pillar and in 2007 accounted for 50 percent of employment, 43 percent of GDP, and 39 percent of exports (predominantly cocoa, cocoa products, and timber). Ghana is the world’s second-largest producer of cocoa. Significant oil reserves, discovered in 2007, have yet to be fully exploited. [b]Business Freedom 56.8[/b] The overall freedom to conduct a business remains relatively constrained. Starting a business takes about the world average of 35 days. Obtaining a business license takes about the same as the world average of 18 procedures and 218 days. [b]Trade Freedom65.3 [/b] Ghana’s weighted average tariff rate was 9.8 percent in 2008. Import bans and restrictions, services market barriers, import fees and taxes, cumbersome and non-transparent standards and regulations, weak enforcement of intellectual property rights, non-transparent government procurement, export promotion schemes, and complex and corruption-prone customs procedures add to the cost of trade. Fifteen points were deducted from Ghana’s trade freedom score to account for non-tariff barriers. [b]Fiscal Freedom 83.5[/b] Ghana has moderate tax rates. The top personal and corporate tax rates are 25 percent. Other taxes include a value-added tax (VAT) and a capital gains tax. Taxes on food products have been reinstated. In the most recent year, overall tax revenue as a percentage of GDP was 20 percent. [b]Government Spending 58.9 [/b] Total government expenditures, including consumption and transfer payments, are relatively high. In the most recent year, government spending equaled 37 percent of GDP. A bloated wage bill is largely responsible for high levels of spending, but expenditure management is generally sound. [b]Monetary Freedom 65.9[/b] Inflation has been high, averaging 14.5 percent between 2006 and 2008. The government influences prices through its regulation of state-owned utilities and controls the prices of petroleum products. Ten points were deducted from Ghana’s trade freedom score to adjust for measures that distort domestic prices. [b]Investment Freedom 65.0[/b] The foreign investment code eliminates screening of foreign investment, guarantees capital repatriation, and does not discriminate against foreign investors. Sector-specific laws further regulate banking, non-banking financial institutions, insurance, fishing, securities, telecommunications, energy, and real estate and may limit or deny foreign participation. Non-transparent and burdensome bureaucracy, political influence, and corruption are deterrents. Foreign investors must register with the government and satisfy minimum capital requirements. Residents and non-residents may hold foreign exchange accounts, and payments and current transfers are subject to few restrictions. Foreign investors may lease but not own land. [b]Financial Freedom 60.0 [/b] Ghana’s financial system has undergone restructuring and transformation. There are 24 banks, and the government has a majority share in the largest bank and full ownership in two others. Bank credit to the private sector has increased. Since the introduction in 2003 of a Universal Banking Business License intended to create more competition in the banking industry, the financial sector has continued to deepen its operations. The relatively developed insurance sector is dominated by two state-owned companies. In 2008, the Non-Bank Financial Institutions Bill was enacted to strengthen regulation and supervision of non-bank financial institutions, including microcredit institutions. Capital markets are developing, and the stock exchange, with over 30 listed companies, has achieved a 45 percent increase in market capitalization. Foreigners may invest in securities listed on the stock exchange without exchange-control restrictions. In 2008, the financial system’s efficiency was enhanced by institutional changes that include the establishment of a common National Payment System Platform and full automation of the stock exchange. [b]Property Rights 50.0[/b] Ghana’s judicial system suffers from corruption, albeit less than the systems in some other African countries, and political influence. The courts are slow to dispose of cases and face challenges in enforcing decisions, largely because of resource constraints and institutional inefficiencies. The legal system recognizes and enforces secured interest in property, but getting clear title to land is often difficult, complicated, and lengthy. Despite laws to protect intellectual property rights, very few cases have been filed. [b]Freedom From Corruption 39.0[/b] Corruption is perceived as significant. Ghana ranks 67th out of 179 countries in Transparency International’s Corruption Perceptions Index for 2008, a slight improvement for the second consecutive year. Corruption is comparatively less prevalent than in other countries in the region. A poll measuring public trust in the government found that the courts were one of the least trusted institutions, second only to the police. [b]Labor Freedom 57.4[/b] Despite some improvements, labor regulations remain restrictive. The non-salary cost of employing a worker is moderate, but dismissing an employee is costly and difficult.