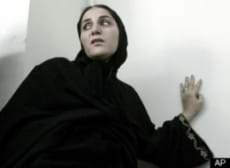 TEHRAN, Iran — Iran on Wednesday hanged a former soccer player's mistress – known as a "temporary wife – who was convicted of murdering her love rival in a case that captivated the Iranian public for several years. Shahla Jahed was hanged at dawn, after spending more than eight years in jail for the slaying of the player's wife, the official IRNA news agency reported. Jahed had become what is known as a "temporary wife" of former soccer star Nasser Mohammad Khani. She was charged in 2002 with stabbing his wife, Laleh Saharkhizan, to death and convicted of murder in 2004 and again in 2009, after her appeal was denied. Contracts with "temporary wives" are a legal way for Iranian men to have mistresses outside marriage, with the agreements lasting from between several hours to a few years. Wednesday's death sentence was based on the Islamic law of "qisas" – or eye for an eye retribution. International human rights groups, including Amnesty International, had campaigned for Jahed's punishment to be halted. The IRNA report said that just before the hanging at Tehran's Evin prison, the 40-year-old Jahed prayed peacefully, then burst into tears and cries, shouting for her life to be spared. The victim's son pulled the chair from under her feet as Jahed gasped for breath in the remaining moments of her life, the khabaronline.ir news website said. The former soccer striker, Khani, also attended the hanging. The reports also said that judiciary officials spent almost an hour in talks with Saharkhizan's family before the hanging, trying to convince them to spare Jahed's life but were unsuccessful. Story continues below Advertisement Prominent artists and respected cultural figures in Iran have also for years appealed to the victim's family to show mercy. Under Iranian law, men and women can commit to a "temporary marriage" for an agreed period of time after a certain amount of money is paid to the woman. In Iran, men are allowed up to four legal wives under Islam and any number of temporary wives. Women can only be married to one man at a time. Jahed initially denied any involvement in Saharkhizan's killing but later confessed to the stabbing, only to subsequently withdraw the confession. Several Iranian experts have said she may have been wrongfully convicted. Murder, rape, armed robbery, kidnapping and drug trafficking are crimes punishable with the death penalty in Iran.