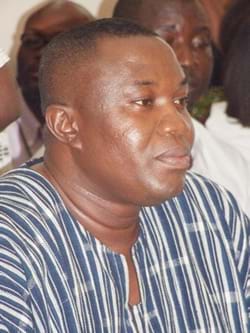 
The Ekye Amanfrom market at the Afram Plains, which had not been in use for 11 years after its construction, was inaugurated on Tuesday by the Eastern Regional Minister, Mr Samuel Ofosu-Ampofo. The 30- acre market was boycotted by traders until the Afram River flooded the old market about a week ago. Following the floods, the Kwahu North District Assembly threatened to use force to move the traders to the new market should they refuse to respond to the several appeals being made to them. The assembly later sent earth-moving equipment to clear weeds at the market and re-gravelled it to create parking spaces for vehicles. Mr Ofosu-Ampofo said the new market had the capacity to develop into the biggest market in the region because there was no market in the area as big as the Ekye-Amanfrom market. He said with the completion of the Agogo-Mame-Krobo road and the provision of potable water and electricity, many people would be going to trade or settle there and therefore called for the development of a layout to guide the development of Ekye-Amanfrom into a modern town. Mr Ofosu-Ampofo announced that the government was investing 32 million U S dollars into the Afram Plains Development Project to open up the place. He said the district assembly had also started the acquisition of land for the establishment of fodder banks to provide places for Fulani herdsmen and their cattle to graze to help stop the destruction of people’s farms by the animals. The Minister advised the people to develop a sense of ownership for the market and take good care of it because it was constructed for them. The Kwahu North District Chief Executive, Mr Charles Evans Apreku, said the assembly had so far spent over GHc50, 000 in clearing, re-gravelling and preparation of the market for the sellers to move in. He said the government had awarded a contract for the construction of a small town water project at Ekye-Amanfrom to provide potable water to the community at the cost of GHC650, 000, which is expected to be completed by December this year. He said a similar project is being constructed for the people of Mame-Krobo at the same cost. Mr Apreku said the Assembly would be providing electricity for the Ekye-Amanfrom community within the next two weeks to help improve upon the security of the market and the town. He said since his assumption of office 15 months ago, the assembly had constructed over 40 new school buildings and four markets and had started the provision of electricity to all the big towns in the district. Nana Osei Yaw, chief of Ekye-Amanfrom, explained that the traders refused to move to the market because the previous leadership of the district assembly instructed them to use hoes and cutlasses to weed the 30-acre market which they felt was too difficult.