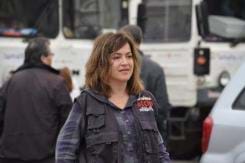 Al Qaeda Releases Two Hostages after Three Months Website
Two women who had been held hostage by Al Qaeda in Mauritania for months have been released, reported Spanish media Wednesday. Alicia Gamez, 35, of Spain, was in good condition, reported Spanish broadcasters. However, there was no official confirmation that the development worker, who was kidnapped almost three months ago, had been released. There was also no word on the two other Spanish women who were kidnapped with her. Additionally, a Burkina Faso-born woman who had been kidnapped with her Italian husband a few weeks after the kidnapping of the three Spaniards, has also been released, according to reports from online Spanish media. According to reports, Al Qaeda operatives released the two across Mauritania's border into Mali. The two were now underway to Burkina Faso.