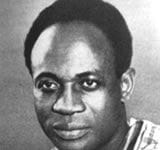 
Accra, Sept. 20, GNA - The African Youth Command (AYC) on Monday heaped praises on Osagyefo Dr Kwame Nkrumah, Ghana's first President, describing him as the "Moses of the Black Race", who liberated Ghana and Africa from political and mental slavery. A statement issued in Accra by Dr F.W.K Akuffo, National President of the AYC described Dr Nkrumah as a visionary, a planner organiser who was full of wisdom. "But for the Central Intelligence Agency of America aided by some unpatriotic Ghanaians and some men in uniform, Osagyefo was going to build a model country on the African Continent. "The unnecessary and disgraceful coup on February 24, 1966 curtailed all the good plans he had for Ghana and Africa. The statement said: "Dr Nkrumah's soul, like Moses shall go marching on…Nkrumah never dies." It said the light that he lit on 6 March 1957 is still burning and very soon the Union of African States would become a reality. "Our tribute will not be complete if we do not render tons of gratitude to our God given and wise President of Ghana, Professor John Evans Atta Mills. May the good Lord give him long life and good health to rule Ghana and to salvage the nation from the mess." The statement also lauded the Kwame Nkrumah Centenary Planning Committee for the good job done in 2009 to mark the 100 birthday anniversary of the pioneer leader. The AYC appealed to President Mills to continue with the Seven-year Development Plan of Osagyefo Nkrumah and revamp the defunct Kwame Nkrumah Ideological Institute to propagate the rich ideas of "Nkrumaism". The statement said Dr Nkrumah truly remained the only founder of the Republic of Ghana and the main icon which propelled Ghana towards rapid progress, and Ghanaians "must work assiduously to make Ghana the Star of the Black Race". It suggested the need for the Independence Square to be renamed "Black Stars Square". Osagyefo Nkrumah who was born on 21 September 1909, who carved a niche as a Pan Africanist while studying abroad, was invited by the erstwhile United Gold Coast Convention (UGCC) to support the struggle for independence. The UGCC deposed Nkrumah of his post as the General Secretary due to irreconcilable political differences, compelling the radical Youngman and his peers to form the Convention Peoples Party, which won Ghana independence on 6 March 1957. Osagyefo Dr Nkrumah who was overthrown in February 1966, died in exile in 1972. His birthday has been declared a public national holiday by the Ghanaian authorities.