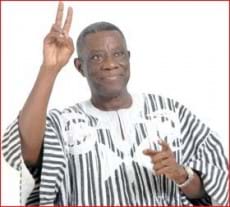 
The ruling NDC says its own pre-election poll shows that President Mills will win the 2012 elections by 56 percent. The Party has therefore rubbished the latest pre-election poll conducted by Synovate which says President Mills will trail NPP Flagbearer Nana Akufo Addo by seven percent if elections were held today. Forty-eight percent of 1,723 people sampled by the Synovate poll said they will vote for Nana Addo if elections were held today compared to 41 percent who preferred President Mills. Propaganda Secretary of the NDC, Richard Quashigah told Citi News the party will rely on its internal polls rather than that of Synovate which he described as an appendage of policy Think Tank Danquah Institute. Richard Quashigah said “our own poll that we conducted which exceeded 5,000 electorates that we talked to said Mills would win by 56% so Synovates outcome for me is nothing but a propaganda piece of the NPP. ” Deputy Communications Director of the main opposition NPP, Perry Okudzeto welcomed the Synovate poll results but said his party does not intend to solely rely on it. He however said the party did not expect President Mills to lead Nana Addo in the latest Synovate polls. Mr. Okudzeto “said it is not surprising that a poll like this would put us ahead of the NDC candidate who is a sitting candidate, because today in Ghana, there are several things that are going that go on to prove the fact that the NPP would be the party that would emerge victor in the 2012 elections. “The pure propaganda and lies that is being churned out on a daily basis and the level of unemployment amongst our youth, this are things that clearly show that Ghana needs a different government from what is on now. ”