Minister Of Finance Faced With Wrongful Application Of Parliamentary Procedure 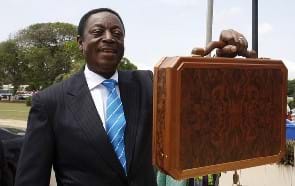 Dr Kwabena Duffuor, Minister for Finance who appeared before Parliament to present government's financial statement for the year ending 31st December 2012 went through some heckling in the House, which resulted in a delay of proceedings for over 30 minutes. Dr Duffuor who was calm, later presented annual budget estimates of the Judicial Service, Audit Service and that of Parliament after he was asked by the Majority Leader, Mr Cletus Avoka to proceed. He then moved for the adoption of the Financial Policy of the government for the year ending 31st December 2012 at the end of which Papa Owusu Ankoma, MP for Sekondi challenged the procedure used which, he said, was wrong. Papa Owusu Ankomah raised the objection as to why the Judicial Service and Audit Service estimates should be separated from the main financial policy of the government. Mr. Osei Kyei Mensa Bonsu, Minority Leader, also supported the idea, saying that it was a wrong procedure and that the Minister should be made to withdraw it. Mr Haruna Iddrisu, Minister for Communication and Member of Parliament for Tamale South also agreed it was wrong and that the Minister should be made to withdraw the statement. Though Mr. Cletus Avoka did his best to explain, the minority never gave in so he (Avoka) accepted finally that the Minister should withdraw the paper. By the ruling of the Speaker, Mrs. Joyce Bamford Addo, Dr Kwabena Duffour stood up walked to the table and moved for the paper's withdrawal amidst shouting - “withdraw," "withdraw", by the Minority. Dr Duufuor then moved for the approval of the 2012 budget. The budget hearing which was to start at 10 am prompt started around 11:52 am. The House adjourned after the reading of the budget.