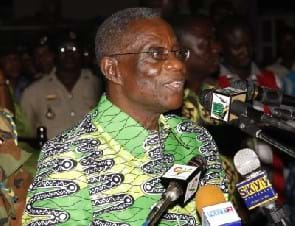 
President John Evans Atta Mills on Friday, dispelled rumours that he was sick and about to die, and proclaimed that he would live to make sure the Better Ghana Agenda was achieved. President Mills, sporting an Agbada, was looking hale and hearty, and wondered why some people always wanted him dead. "It is quite clear, to some people, a living Atta Mills brings them a threat," President Mills said, in an interview with Journalists, at the Osu Castle in Accra. During the interview, President Mills explained why he retained Vice President John Dramani Mahama as his running mate for Election 2012. "Atta Mills will live and make sure the Better Ghana Agenda is achieved," President Mills said. He spoke of the agitations by a section of the youth in the Volta Region a few days ago, and said anyone who wanted to be fair to Government would see that the Volta Region had had its fair share of development under the Mills Administration. President Mills said Government would increase the tempo of its projects, now that resources it sourced for were about to come through, and assured Ghanaians that development was a process and that all could not be achieved at a go. On his retention of Vice President Mahama as running mate for Election 2012, President Mills said his election at the Sunyani Congress, was an approval of his team for a good job so far done in the last two and half years. He said his Administration believed in team work, and that team received the seal of approval at the Sunyani Congress. President Mills said as the President, he had the prerogative to choose his running mate, and his declaration of the Vice President was in accordance with established rules of the ruling National Democratic Congress (NDC). He described Vice President Mahama as a person with a good track record, adding, 93I want him to continue". "I have my work cut out for me.... We are going to remain focused to build the Better Ghana promised Ghanaians."