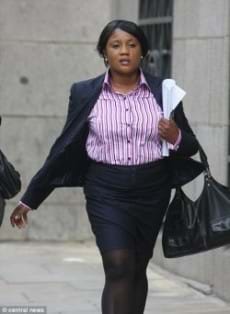 
A nurse who killed her baby daughter by force-feeding her using a method she claimed was common in her native Ghana is facing jail following a three-week trial. Gloria Dwomoh, 31, admitted "cup feeding" by pouring liquidised food into the infant's mouth using a porcelain jug while weaning her, in what is believed to be the first case of its kind in the UK. The 10-month-old baby, Diamond, contracted pneumonia caused by food – including meat and cereals – repeatedly entering her lungs as she coughed and choked during force-feeding over a period of months. She died in March last year after being taken to hospital near to her home in Waltham Forest, east London. Dwomoh, who worked at St Thomas's hospital, south London, had wept as she demonstrated to the jury how she used two small china jugs for feeding, as she was trying "to give her nutrients rather than milk". She told the court: "I didn't do anything at all to hurt her." She and her siblings had been fed the same way by her mother in Ghana, she said. She denied causing or allowing the death of Diamond, but was unanimously convicted. A 37-year-old man, who cannot be identified, was acquitted of the same charge. The pathologist who examined Diamond said he had "never seen so much food in the lungs of a dead child". Describing it as a very sad case, the prosecutor Andrew Edis QC said the food had gone down the wrong way over months. Dwomoh had placed the spout of the jug into the child's mouth "to prevent her closing it when she did not want any more – to prevent her having any choice". He told the trial: "The mother, she is a nurse, and that involves a degree of extra insight." She was said to be obsessed with the baby's weight. Dwomoh was remanded in custody for sentencing on 9 November as Judge Brian Barker QC described the case as "very disturbing on any view". Social services had warned Dwomoh and the male defendant about force-feeding, but the advice was ignored. The man was said to have told police: "To feed the Ghanian way is to pour it into your mouth." Laura Eades, chair of Waltham Forest Safeguarding Children's Board, expressed "deep regret and sadness" for Diamond's death, and said it was believed to be the first case of its kind in the country. A serious case review "had found there were weaknesses and shortcomings" by some of those involved with the family, Eades said, but the review had concluded that the child's death was "not predictable". She said: "Had best practice been followed, the risk to Diamond of force feeding would have been better recognised and the family would have been offered further support and intervention. This should have reduced the probability of Diamond being subject to behaviour that proved in this case to be fatal." Among its findings, the serious case review said those dealing with the family were "insufficiently sensitive to obtaining an understanding of the significance of cultural and/or individual values with regard to weight, body image and feeding practices". It also found communication problems may have arisen because of difficulties understanding the male defendant's English, and inexperience in dealing with force-feeding. It also found that because the "maltreatment" was motivated by concern for a child's welfare, professional concerns were "mistakenly diluted" and there were significant shortcomings in the child protection inquiries by staff at an Islington hospital, Waltham Forest children's social care and the Metropolitan police service child abuse investigation team.

Strains of Covid-19 discovered so far 41

Coronavirus: What misinformation has spread in Africa? 18