Who Got Stella Damascus Angry At NMA 2008 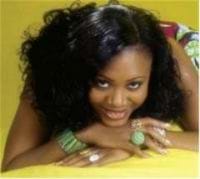 Stella Damasus is one lady after many hearts.The young and upwardly mobile actress enjoyed herself in Imo State.She told all those who care to listen that she is proud to be home because her mother hails from Imo State. However, something happened at the event that got Stella really upset.When it was time to take dinner on friday night, they were shoved aside by some overzealous security men at the ceremony.NFC watched as Stella,Ini Edo and Uche Jombo stormed out of the Banquet hall of the Concord Hotel in anger.