When Acting Becomes So Real... 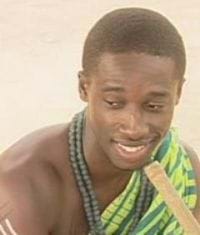 Fiifi Coleman Over a thousand location audience shared tears during the production of a new Ghanaian movie; ASHANTI KINGDOM. The chain of tears started when the main lead actor known around the showbiz area as William Opare opened the scene to a real character. According to some audience, he was soo realistic as if he was truely going to lose his only head on set. Surprisingly, almost every withness on that current set including most of the village inhabitants and all the crew members were also in deep sorrow. According to the DOP (Cameraman) who also expressed some sadness stating that, through many years of experience, he has never seen such an emotional scene ever in his life. Logor (William Opare) played his role as Tweneboa Kodua, which demanded an early Sacrifice of his head, in the story(script). His mate Fiifi Coleman who also played a high-ranked role as the great Osie Tutu, also said;" I thought he was just about to lose he who life, through this strange acting career." He continued to state how this event made him forget some virtal parts of his script, which almost got him bothered. But in every good work, there is a great reward, and this brought some handshakes, embraces, and other forms of congrats to his life, that very moment after the scene. This film is being produced by Movie Africa and will be on the market very soon!