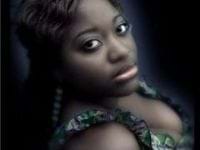 Vashti Jones (aka Nana Yaa), one of Africa’s finest model and actress has died. This was confirmed to Happy fm by her mother, Ms Wellington Yancy. Vashti who had been in Ghana died on Tuesday morning after a short illness. According to the mother, the body would be taken to Liberia for burial. During her visit, she participated in several movie productions and was one time the Happy Face of the Week, a weekly feature on happyghana.com She also wrote and produced the movie, “Chosen Paths” which was filmed in Minnesota. Born on the 17th of April 1980, in Liberia, to Kreston Jones and Wellington Yancy. Vashti, as she is popularly called, attended St John’s Grammar school at Achimota, and continued to Shaw University in Raleigh North Carolina,USA where she studied biology. Vashti who has been acting since she was a student at the St Theresa’s Junior Secondary School Agomanya also loved to write plays, acting and singing during entertainment. This continued acting throughout her secondary school days After Secondary School, she left for the US where she was encouraged by a lot of people who were impressed by her skills and talent to follow her dreams and work seriously on them. So far she has featured in several African movies and about 30 short staged plays. She would be forever remembered for her passion in charity work and thoughts for children.