US Singer Eddie Fisher Dies At 82 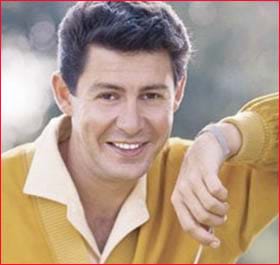 US singer Eddie Fisher, who sold millions of records in the 50s and was married to Elizabeth Taylor and Debbie Reynolds, has died at the age of 82. Fisher was a teen idol in the 1950s with dozens of Top 40 hits and his own TV show. His marriage to Debbie Reynolds produced two children, including Carrie Fisher, who starred as Princess Leia in the original ‘Star Wars’ trilogy. Fisher was married five times in all, including also to Connie Stevens. Fisher's top songs included ‘Thinking of You’, ‘Any Time’ and ‘Oh, My Pa-pa’. His divorce from Debbie Reynolds to marry Elizabeth Taylor caused sensational headlines. His daughter, Tricia Leigh Fisher, told Associated Press that Fisher had died on Wednesday night of complications from hip surgery at a hospital in Berkeley, California. “Late last evening the world lost a true America icon,” Fisher's family said in a statement. “One of the greatest voices of the century passed away. He was an extraordinary talent.” Edwin Jack Fisher was born in August 1928 in Philadelphia. He married Debbie Reynolds in 1955 and the pair was dubbed ‘America's favourite couple.’ But he sensationally divorced her after Elizabeth Taylor's husband and Fisher's best friend, Mike Todd, was killed in a 1958 plane crash. Fisher and Taylor married in 1959 but it lasted for only five years. She then married Richard Burton. Fisher then had two daughters with Connie Stevens and he married twice more.