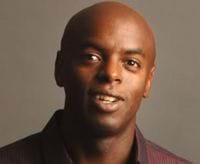 Urban music legend and king of the airwaves Trevor Nelson has been confirmed as the host of the first ever MTV Africa Music Awards with Zain (MAMA). The MOBO-winning DJ and TV presenter will preside over the glittering music awards ceremony taking place at The Velodrome, Abuja, Nigeria on 22 November 2008. Known as ‘godfather of urbantainment’ Nelson has become a household name after more than a decade of championing urban, club and experimental music on radio and TV, including MTV’s seminal urban music chat show, The Lick and BBC3’s The Lowdown. A goldmine of information on everything to do with hip hop, R&B, dancehall, soul and other urban genres, Nelson’s Saturday night Radio 1 show is a regular fixture with the biggest urban stars on the planet, with Trevor regularly welcoming artists such as Rihanna, Kanye West, Lil Wayne, Lemar, Kelly Rowland and Will I Am into his studio. Trevor currently hosts two further radio shows for the BBC - the weekly breakfast show for 1Xtra and a Wednesday night soul music show for Radio2. ‘This is just a dream gig for me,’ commented Nelson. “The MTV Africa Music Awards with Zain puts the spotlight on the kind of music I’ve championed all my life. The energy, passion and talent of the African music scene is off the scale and I can’t wait to get to Nigeria on 22 November to see Africa’s finest artists showing the world what they can do.” A precocious Nelson began DJ-ing at an early age but his big-time career really kicked off when the young entrepreneur started up the Madhatter sound system, putting on warehouse parties in London. DJ-ing the graveyard shift on then pirate station Kiss FM in London led to a daytime slot and a directorship once the radio station went legit. Continuing his heavy DJ schedule, Nelson made a name for himself at the infamous Soul II Soul Sunday night jam at the Africa Centre. After 10 years with Kiss FM, 1996 saw Trevor make the move over to Radio 1 to present Rhythm Nation. Within a year he began a second show on Saturday afternoons and currently hosts the live Saturday evening slot from 19:00 BST every weekend. Nelson continues to DJ across the UK and around the world and this summer enjoyed his sixth season at Ibiza’s Pacha nightclub. He is a veteran presenter with many high profile events under his belt including the MOBOs and the Prince's Trust Urban Music Festival, and has hosted the ‘red carpet show’ at the MTV Europe Music Awards for the past three years. Nelson has also released a number of successful compilation albums including Pure Grooves and INCredible Sound Of Trevor Nelson. Commented Alex Okosi, Senior Vice President & Managing Director, MTV Networks Africa, ‘Trevor’s love and infectious enthusiasm for urban music in all its rich variety makes him the perfect choice to host the MTV Africa Music Awards.’ The MTV Africa Music Awards with Zain takes place at The Velodrome, Abuja, on Saturday, 22 November 2008 and broadcasts on MTV base (DStv Channel 322, GTV), partner networks and terrestrial channels STV (Nigeria), AIT (Nigeria), NTV (Kenya), WBS (Uganda), TV3 (Ghana), TBC (Tanzania) and RTGA (Democratic Republic of the Congo) from 29 November 2008. To vote for your favourite artist or video, please go to mama.mtvbase.com. Music fans with WAP/GPRS enabled phones may also vote at m.mama.mtvbase.com (standard internet charges apply). Voting closes on Tuesday 18 November 2008.