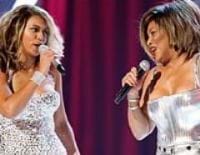 Tina Turner says Beyonce Knowles will never be "rock 'n' roll." The Simply The Best singer claims she was an inspiration for Beyonce, but although she is a great singer the former Destiny's Child star will never match her for raw talent. Tina said: "Beyonce was one of the ones that were sitting in front of her little television, her little self looking at the big screen when I was Tina in the 'Ike and Tina Turner days' and she took from all the stars at the time. "Diana Ross influenced her, I influenced her. What I like about her is that she knows what she's doing, she really did her homework and decided to stay elegant. "She's not rock 'n' roll - she's totally elegant. Unless your rock 'n' roll from the heart you can't mimic that. The stance, the movements, it has to come from the inside." Tina, 68, and Beyonce, 26, performed together at the 50th Annual Grammy Awards this February. Meanwhile, Tina has announced plans to tour the UK - eight years after retiring from performing live. The music legend will play four dates starting in March 2009 at London's O2 arena. Tina said: "After performing with Beyonce at the Grammys, the response was overwhelming. "Everywhere I went people were asking me when I was going back on tour. So after a lot of thought and planning we announced an American tour. "Now Europe beckons and I don't want to let down all my loyal fans over there."