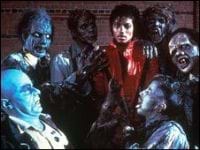 John Landis, who directed Michael Jackson's Thriller music video, is suing the pop star over his share of profits from the short film. The film-maker claims he has not received his 50% share for at least the past four years from Jackson's now-defunct company Optimum Productions. He also alleges the star does not have the right to license games, toys and comics based on the zombie video. Landis is best known for Blues Brothers and An American Werewolf in London.