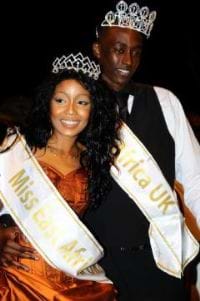 26th July 2008 was bound to be a historical day to be remembered even by those who did not attend the much anticipated event; with the crowning of the first ever Mr East Africa UK, the third Miss East Africa UK and the surprise crowning- Miss Kenya UK and it's all thanks to the founder Pauline Long and her dedicated team of organisers. Vicky Njoki Ngari-Wilson who represented Kenya emerged the winner of the prestigious title of Miss Kenya UK 2008 in which Pauline Long was one of the judges however everyone was overwhelmed with shock and was a ray of confusion when she also became the favourite of a team of 14 high profile judges to become the winner of the coveted title of MISS EAST AFRICA UK 2008. The sold out show which was fundraising for Kenyan children's charities that took in children that were affected by the post election violence earlier in the year took place at the Bloomsbury theatre London and was attended not only by East Africans but guests from other parts of Africa, Canada, US and France. The highlight of the night was the display of the different East African traditional attire from Kenya, Uganda, Tanzania, Rwanda, Malawi, Ethiopia, Eritrea, Sudan and Somalia. Each of the 40 beautiful male and female contestants modelled their creation in front of a very cheerful crowd. Meanwhile the uniform wear designed and made by Pauline Long with an excellent choreography left the crowd amazed at how much preparation had been put in the contest. This was a beauty pageant with a twist. The evening wear section had a variety of classic designs ranging from gowns designed by Corset Art and men's shirts designed by Tamara Johnson.