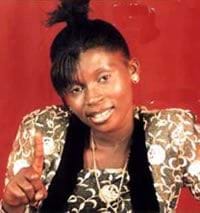 News in the media says gospel music star, Rev. Esther Smith has separated form her husband of four years, a Kumasi based pastor, Rev. Ahinkan Bonsu. The reports say the break resulted as Esther gave her newly born baby with her husband to another man in Germany for adoption. The man was not named in the reports. But a new angle to the saga has unfolded Saturday afternoon, on Joy FM’s entertainment show, Megahits. Speaking during the show, D. J. Abio, of Channel R, said that Esther Smith who has so far spoken only to Holland based FM station, Spirit FM, claims that she left the husband because of infidelity. According to D. J. Abio, Esther is accusing the husband of ‘having an affair with their househelp’, which is the reason for the break of the marriage. On the other hand, according to the radio presenter, Esther’s husband is also accusing Esther of infidelity. He said Rev. Bonsu, speaking to him, accused her of having affairs with other men including one Fiifi a worker at the Tema Harbour, whom Esther got acquainted with through the Tagoe Sisters. According to him Rev. Bonsu said, this man, Fiifi has been pestering Esther long before they were married and continued even after they got married. According to D. J. Abio, Rev. Bonsu says he even doubts the paternity of two of their children, their second and third one, because, he claims, Esther had mentioned some other men to him as the fathers of these children. He however, did not provide the names of these men. The Rev. Bonsu, D. J. Abio said, had spoken on Channel R, where he said that he has never known peace ever since he married Esther, because, while her father did not sanction the marriage, and therefore, did not attend the wedding, her brothers who are drug addicts have never given him peace. He said Esther’s brothers smoked marijuana, a habit he tried to discourage them from but they became offended and never liked him. The radio presenter also said, Esther’s father has expressed his happiness over the fact that the marriage was broken. D. J. Abio said he was the MC at the couple’s wedding. He said, Esther had also accused Rev. Bonsu of casting a spell on her. According to him, she claimed that, it was the spell that made her to marry him in the first place, but now, she claims, the charm has worn off. He revealed that Esther said once she went to Akwatia, where the Rev. Bonsu used to live for a performance and after they met, the Rev. Bonsu gave her a piece of gold as a gift. She said, after this she became so fond of him till they got married. D. J. Abio said according to sources in Holland, Esther now claims that, that gift of gold was a spell which the Rev. Bonsu cast on her, but that spell is now broken and the marriage is over. He said, Esther’s family has returned the dowry and drinks to the rev. Bonsu’s family and they have accepted the items. As a result, therefore, the marriage is dissolved traditionally. He added that, Rev. Bonsu told him the matter is in court, pending any possible outcome, even though he wished that as a ‘man of God’ and for the sake of their three children, they would have resolved this matter peacefully. He moreover, denied the charge of casting spells on Esther, who is currently in Germany.