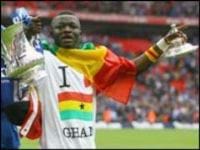 Ghana football star Sulley Muntari celebrated Portsmouth FA Cup in style. I have never supported football in the way before however last Sunday I made an exceptional effort as I live half an hour from Portsmouth. My son and his friend decided to join me to Portsmouth Southsea to cheer Sulley Muntari up with the Ghanaian flag. There were more than 200,000 people at Portsmouth. Muntari’s name was on everyone lips as well as the rest of the team. The players were on a double decker open bus, the first bus was full of the press photograhers, the middle were the players the third was for the families of the players. The parade was a high profile one and started from Fratton Park to Portsmouth Southsea. The whole show brilliantly organised as Portsmouth( Pompey ) have not won the FA cup since 69 years ago. It was such a joy seeing Harry Rednapp, Kanu, Sulley and the rest of the team as we the supporters chanted, “Play up Pompey Pompey Play up”!. At Portsmouth Soutsea there was big stage with a huge TV screen so that everyone could either saw the players face to face or via screen. The whole atmosphere was electric. Everyone was happy, and street hawkers were selling whistles, flags, drinks, T shirts, hats, etc. I felt I was in Ghana at one point as the street hawkers race for customers. The hawkers added some kind of flavour to the celebrations. During the celebrations some one asked me what the Ghanaian flag was doing in Portsmouth instead of the Pomey flag? My reply was that, you guys have got one of our man and I here to ensure that Ghana also get the recognition too. He smiled and said yep! After the celebrations I was able to catch glance of Sulley as he and his family were about to enter their coach. As he saw me with the Ghanaian flag , he got the connection waved and smiled. The boys I was with said, My word it is amazing how Sulley is connecting with you via the flag I was so proud of him.