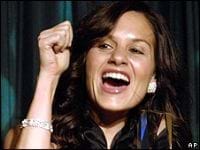 Grammy-nominated songwriter Kara DioGuardi, who has written tracks for Gwen Stefani and Kylie Minogue, is joining American Idol as a judge. The 37-year-old will join Simon Cowell, Paula Abdul and Randy Jackson in the latest series of the hit show. DioGuardi has also written and produced for artists including Christina Aguilera and Leona Lewis. "I'm going to be a straight-shooter," she said. "I'm just somebody who's really honest and gives my opinion." "If I feel the need to be hard with someone in order to get that across, I will be. "And if I feel I need to be softer and more nurturing with some of the contestants, I'll be that." Auditions open DioGuardi said the quality she looked for in singers, aside from a "great voice", was an individual style. "It's not about vocal acrobatics. It's about being unique and doing things that are identifiable to you," she said. "What makes an artist is when their song comes on the radio, I know exactly who it is." DioGuardi will join Abdul, Cowell and Jackson for the start of auditions in New York this week. About 32 million viewers - up 3% on the previous year - watched rocker David Cook beat teen favourite David Archuleta by a landslide to win the last series of American Idol.