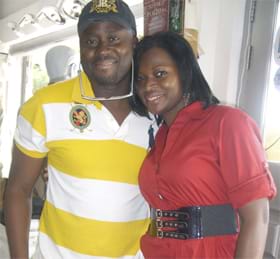 Following its outstanding performances in Ghana and some parts of the African continent, a large number of showbiz personalities have associated themselves with rLG mobile phones. rLG Communications, the manufacturer of rLG mobile phones who recently launched its G-series on the Ghanaian market, is currently working with two seasoned movies stars, Desmond Elliot from Nigeria and Ghanaian actress Lydia Forson as its brand icons. The two movie stars, who are now the faces of rLG G-Series mobile phones, have risen to the fore-front of the African movie industry and their association with rLG has influenced a large number of music and movie fans to use rLG mobile phones. rLG, which has a work force of about 5000, is currently listed as one of Ghana’s most outstanding corporate companies which has made a lot of impact in Ghana and some parts of the African continent. The corporate communications manager of rLG, Miss Millicent Atuguba, said her company has begun penetrating the West African market with its brand ambassadors, Desmond Elliot and Lydia Forson, and hope to capture 80 percent of the mobile hand set market by the end of the year. rLG is a growing phenomenon in the telecommunications industry in Ghana today as it makes waves on the local market and even looking beyond the country’s borders. rLG Communications began operation in Ghana a little over a decade ago and has since carved a niche for itself in the local telecommunication industry and its products are significantly cheaper than their peers, with prizes ranging between Gh¢30 and GH¢350. It is the first company in Ghana to start assembling mobile phones in the country, through which it offers a spectacular range of phones.