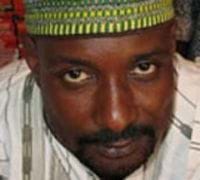 A film producer in Northern Nigeria has been charged with breaking new stringent censorship laws. Hamisu Lamido, known in the Nigerian film world as Iyan Tama, faces a jail term for releasing his film without allowing it to be censored. Mr Lamido says he did not release the film in Kano and denies he has broken any law or censorship regulation. Islamic authorities in Kano state brought in new restrictions after a sex scandal involving an actress. Mr Lamido was arrested last Friday and was remanded in custody until his court appearance. His film Tsinstiya, the broom, is a Hausa language version of West Side Story, funded by the US embassy in Nigeria. The Kano state Sharia Commission banned filming for six months last year after a well known actress was featured in a bootlegged sex film, shot by her boyfriend on a mobile phone camera and released on DVD. After the ban the authorities brought in strict conditions on film makers. Singing and dancing was banned in films. The authorities said they were immoral and "against Hausa culture". Production companies must also get a licence to operate according to the new rules. Co-star of Tsintsiya, Baballe Hayatu said: "This is a political thing. It seems the censors have a personal grievance against Iyan Tama. In Kano the film industry is really suffering".