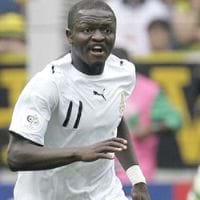 Sulley Muntari wants Claude LeRoy to stay as Ghana coach Ghana's FA Cup winning star Sulley Muntari has urged Claude LeRoy to rethink his decision to step down from coaching the Black Stars. LeRoy revealed last week he would not be taking up an option to extend his contract following the break up of his coaching team and would be looking for another coaching job elsewhere. After helping Portsmouth to beat Cardiff 1-0 in the FA Cup final on Saturday Muntari said: "Come back, we don't want you to go." "Ghana are my country, my national team and I want the best for them." Muntari, who has 38 Ghana caps, was surprised and disappointed to hear of LeRoy's decision as the two had grown close during the Frenchman's two years at the helm. LeRoy was full of praise for Muntari when the midfielder scored for Ghana in their 2-1 win over Guinea in the opening game of the Africa Cup of Nations in January. "There's no player like Sulley in the world, I'm not saying he's the best in the world, but that he's got qualities that set him apart," LeRoy said at the time. "He's very strong technically, and likes always to battle." Muntari, who wrapped himself in the Ghana flag after Portsmouth's victory, feels the club can improve next season, after finishing eighth in the English Premier League. "For sure I believe we can step up again and next year we can make the top six," he said. "I believe we are a top six side and there is a lot more I can bring in my second year." Muntari became only the second Ghanaian to win the FA Cup in his first season at the club, following in the footsteps of his compatriot Chelsea's Michael Essien.