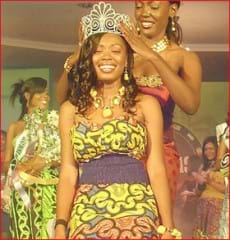 A very confident and eloquent Miss Ramatu Sidic clinched a treble and set the Adae-kese Hall of the plush La-Palm Royal Beach Hotel in Accra to a rapturous standing ovation, last week Friday. The 22-year-old student of the Institution of Profesional Studies (IPS) scored a spectacular hat-trick on a platform of beauty contest, winning the awards for the best costume and dance, as well as the ultimate Miss ECOWAS Ghana 2010 crown. This is how she by-passed 13 other contenders and became the toast of those who thronged the venue for this year's Miss ECOAWS Ghana pageant, such as the Minister of Foreign Affairs, Alhaji Mohammed Mumuni, the deputy of Tourism, Hon. Kobby Akyeampong, and the deputy Minister of Local Government and Rural Development, Hon Elvis Afriyie Ankrah, among other high-profile dignitaries. The announcement of Ramatu as the winner drew spontaneous applauds from the patrons, as her poise, intelligence, confidence, articulation and grasp of current issues, especially on the proliferation of illicit small arms in West Africa, also endeared her to them. Thus, she leads a two-man contingent, including the first runner-up, Miss Shirley Nwangere, a 22-year-old student of the Kwame Nkrumah University of Science and Technology (KNUST) in Kumasi, to represent the country at the upcoming sub-regional Miss ECOWAS beauty pageant, to be held in Sierra Leone in November, this year. An initiative of Accra-based 702 Productions Limited and supported by the ECOWAS Commission headquartered in Abuja, Nigeria, the Miss ECOWAS pageant is an annual beauty organised for contestants from the 15-member countries of the ECOWAS, as a means of engaging the youth to promote peace in the sub-region. This year's pageant, themed Peace Building and Development, is geared to spur awareness about the proliferation of illicit small arms in the sub-region and will see two contestants each from the participating countries lock horns to win the ultimate crown as the Miss ECOWAS 2010 Queen. Whoever emerges the queen also becomes an ambassador to promote peace and champion the Youth Peace Initiatives of the ECOWAS Commission for a period of one year, alongside all the golden opportunities and mouth-watering prize packages. With Ghana's representation now settled in the pair of Ramatu and Nwangere, excluding the pretty second runner-up Edna Agamah, all fingers can now remain tightly crossed for the biggest showdown in Sierra Leone. Ramatu took home a whopping GH¢ 1,500 cash prize, plus another GH¢ 1,500 allowance for a year, a set of furniture, fabrics from the Akosombo Textile Limited (ATL) and a 22-inch flat-screen colour television set. The first and second runners-up also grabbed GH¢ 1,000 and GH¢ 5, 00, respectively, whereas all the other delegates received various consolatory prizes, ranging from money, fabrics and certificates. Other award winners are \best peace message – Kaimo, best costume- Ramatu, Miss congeniality- Mary, Miss Photogenic – Olivia and Best Dancer – Ramatu. The rest are Best behaved Delegate- Addo Kailey, and best catwalk – Ama Amapofo. The event was sponsored by – Rice Masters - CCTC, Life Style Gallery, B Systems, Black's Secret, Star Nails.