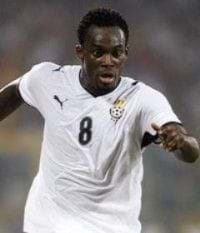 A Ghanaian law student, Veralie Dela Ackumey, who claims she was soccer ace, Michael Essien’s secret girlfriend for many years, says Essien is a love cheat. In a story published by News of the World, Dela claims Essien may be a successful footballer, but as a person he is a failure. Read the full story written by Dan Evans. SOCCER ace Michael Essien is exposed as a shameless serial love cheat—by the secret long-term girlfriend he has HIDDEN from the world. Pretty law student Veralie Dela Ackumey today tells how Chelsea star Essien, 25, cheated on her at least FIFTY TIMES throughout a torrid three-year relationship in which he NETTED women on dating websites. And the 25-year-old beauty reveals the tactics the philandering midfielder used time and time again to dribble his way back to her... WEEPING and even getting his MUM to apologise for him. "He has lied through his teeth to cover up what went between us," Dela tells the News of the World. "He may be a successful footballer, but as a person he is a failure." "He cheated on me so many times—more than 50." Juggling Loyal Dela even spotted pictures of one lover, ex-£3,000-a-night hooker Cassie Sumner, semi-naked in Essien's manbag while he was fishing around for change for a CHURCH COLLECTION. But the final whistle came after a mesmeric performance even by Essien's Chelsea standards—when he was juggling 25-year-old Cassie, Ghanaian actress Nadia Buari AND blonde personal trainer Lurata Murati, 28, behind her back. Yet all looked rosy when Dela met the Ghana international in their home city Accra in 2003. She says: "He wasn't that famous back then and I knew nothing about football—but we talked about the world and what we wanted from life. It was natural when we made love and everything clicked between us." During their passionate romance he whisked Dela off to live with him in Lyon where he played for the top French side. It was then that Dela started getting the first inklings of what he REALLY wanted from life. "He was getting messages from girls all the time—one from a Ugandan flight attendant he picked up after an international match," she says. "I found text messages saying ‘I miss you'. But when I confronted him he made a great show of how bad he felt about cheating. "He cried and begged me not to leave him. He always did that. He knew how to appeal to my better nature by crying until I pitied him. He would tell me he desperately wanted to change—that only I could understand him." Essien also got his mum Aba to help smooth things over whenever he was found out. "Aba was well aware what Michael got up to but she'd call me and say ‘Have patience, he will change'," says Dela. "So I stayed patient. I wanted to help him." In August 2005 Essien landed his £25 million dream move from Lyon to Chelsea, taking Dela with him. "We stayed for the first months at the Chelsea Hotel at Stamford Bridge," says Dela. "I saw Jose Mourinho there a lot. He was a nice guy. I found myself standing next to Michael and him at a press conference live on Sky TV." But it was a rare appearance as £90,000-a-week Essien made sure Dela stayed in the background. She admits she wasn't much of a WAG. "I went to the matches but I didn't meet any of the other players' wives or girlfriends," she says. "I just wanted to study law while they were more interested in shopping."