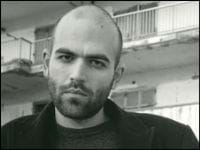 Roberto Saviano - the author of an unblinking expose of the Neapolitan mafia, the Camorra - has said he wants to leave Italy. He says he is fed-up living under a round-the-clock armed guard. Mr Saviano's book - Gomorrah - exposed the power and ruthlessness of the organisation from the inside. It has been made into an Oscar-nominated film. But Mr Saviano says he is now a victim - a prisoner of his own success, with the Camorra vowing to kill him. He is 28 and Naples born and bred, but for two years he has had to live in hiding far from home and under a 24-hour armed guard. He has had enough. "I want my life back," he told the newspaper Repubblica. "I want to be able to walk in the sun and the rain. I want to fall in love, to drink a beer in public - to meet my mother without her being terrified." Above all, he says, he wants to write - and the only way to do that is to leave Italy, for a while at least, to regain contact with real life. The Camorra has other ideas. Italian police this week said they had uncovered a plot to kill Mr Saviano before Christmas.