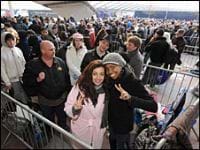 Hundreds of fans are queuing at the O2 arena in London as Michael Jackson tickets go on sale to the public. The 50-year-old pop veteran is playing a 50-date residency at the venue, beginning on 8 July. Some 360,000 tickets were sold to registered fans before sales opened earlier, and if all 50 dates sell out, sales will have reached a million. Organisers say the This Is It tour has become the fastest-selling in history, with 33 seats sold each minute. Jackson is said to be "thrilled" by the response. Randy Phillips of promoters AEG Live said: "Not only are these concerts unparalleled, these records will never be broken. "We knew this was show business history, but this is a cultural phenomenon." Pre-sale problems Pre-sale tickets for Jackson's first 10 dates sold out on Tuesday but some fans complained of "technical problems" trying to register online. Ticketmaster director Chris Edmonds said demand was "unprecedented". Tickets for the Jackson shows are already being sold on the online auction website eBay. Prices on the site range from £170 to £10,000, but tickets bought directly from the singer's website or Ticketmaster cost up to £75. Jackson, who has won 13 Grammy awards, has said this will be the last time he will perform in the UK. In August and September 2007, Prince played 21 concerts at the O2 arena together with a number of after-shows at its club venue, Indigo.