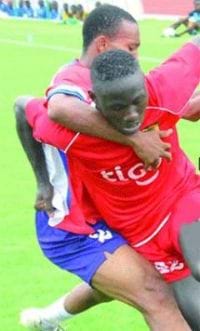 Kumasi Asante Kotoko failed to secure the maximum three points at stake at the Baba Yara Stadium last Sunday but grossed a record GH¢ 210,000 (¢2.1 billion), the highest gate proceeds ever at any stadium in the country. Typical of Kotoko-Hearts matches, the crowd was very thick. Indeed the stadium was virtually filled to capacity, and no wonder the huge amount was realised from the gates to make up for the sullen faces that the supporters of the Porcupine Warriors wore after the match. The gate proceeds aside, it was also great spectatoring on the afternoon as the fans conducted themselves so well to make football the winner. When even they felt FIFA referee William Agbovi was taking controversial decisions, they resorted to booing to express their displeasure, which many saw as normal. With about 80 percent of the fans rooting for Asante Kotoko, the atmosphere would have been very intimidating for any other side. But Hearts of Oak, who are traditional performers at the Baba Yara Stadium, had other ideas. And they lived up to history by snatching a valuable point when poor form all year had led the pundits to write them off as 5-1 underdogs. Hearts have been a sorry sight this year, having been pummelled left and right by even so-called smaller clubs. Expectations in Kumasi were, therefore, huge for Kotoko, and when the players sporting brand new tiGo jerseys trotted onto the turf, a cacophony of noise vibrated through the main bowl of the stadium. Hearts of Oak were also not left out of the pre-match drama as their fans went into unstoppable drumming and singing. Kotoko could have gone up by at least two goals in the first ten minutes if they had remained focused in front of goal. But poor shooting and hard tackling from the Hearts back four of Hassan, Ofei, Coleman and Vardis kept danger at bay. Many were expecting a repeat of the Coleman-Bekoe first round drama where the defender followed the striker all over the 90 minutes, even when the leading striker was listening to instructions from his coach at the touchline. Coleman maintained that he wanted the game to flow naturally, but in Vardis, Bekoe found another rough customer. Showing his immense talent in goal scoring, Bekoe managed to score against Hearts, and, in celebration, he lifted his eyes and hands into the heavens to give praise to God as he claimed Hearts supporters had claimed he could never score against the club whilst with Kotoko. Kotoko appeared swift on the attack with Oduro supplying the needed balls to the front men, but the final delivery was always a problem. Their Achilles Heels was at the back and they were exposed by the Hearts attack where Don Bortey played excellently. The defensive pair of Richard Manu and George Asare failed to click, and had Hearts showed seriousness they could have scored from counter attacks. Sorely missed by Kotoko was Harrison Afful whose absence as a result of national duty, disabled the left back position from where he engineers many of the attacks of the team. Beleaguered coach Eyal Lachman said his game plan was to tighten up the middle and try to catch Kotoko on the break. And it was a relief for the coach whose selection had been criticised by Hearts supporters and even some management and board members.