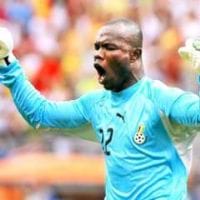 Ghana goalkeeper, Richard Kingson has ended his stay with English side, Birmingham City, a year before his contract was due to expire. An agreement wa sreached between Birmingham City and the 29-year-old Ghana international to have his registration cancelled. Kingson can now join another club on a free transfer. The goalkeeper who joined the Blues from Greek side, Antalyaspor last July played one league game in his season at St Andrews Park, in the 2-0 defeat by Portsmouth in November. He also played twice in the Carling Cup