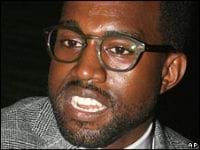 Rap star Kanye West is to close the MTV Music Video Awards, a year after complaining about failing to win a single prize at the event. After the 2007 ceremony, where he did not perform on the main stage and missed out on five awards, West vowed that he would never return to MTV. The musician joins a line-up including Christina Aguilera and Britney Spears, who will open the show but not perform. Sunday's ceremony in Los Angeles will be hosted by Russell Brand. Spears, who is nominated for three awards, said MTV had "long played an important part in my career". Jackson appearance "I'm excited to open the entire show, to say 'hi' to my fans and to be nominated," she added. Last month her manager ruled out a performance at the event, a year after her stage comeback was largely panned by critics. Aguilera will make her first televised performance since the birth of her son in January. Other performers will include R&B star Rihanna, the Jonas Brothers and rapper TI. Speculation that Michael Jackson will make an appearance at the 25th VMAs has been played down, with MTV president Van Toffler saying, "I don't know whether that's going to happen". Producers of the show are planning to stage "live music videos" set around the lot of Hollywood's Paramount Pictures involving some of the main performers, including Pink and TI. Guests at the event will receive gift bags worth $15,000 (£8,520), which contain designer clothes, jewels and tickets for a Caribbean holiday. At last year's event in Las Vegas, Kanye West complained that he had been ignored for two years in a row. "That's two years in a row, man... give a black man a chance," he said. "I'm trying hard, man, I have the... number one record, man." The rapper is due to release a new single, Love Lockdown, in the US on 8 September, while he is scheduled to bring out a new album before the end of the year.