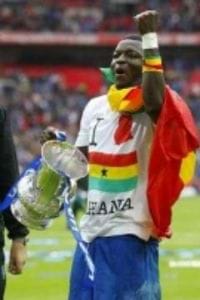 Black Stars midfielder Sulley Muntari is set to complete a move from Portsmouth to Inter on Friday after a deal was agreed by all parties. The Nerazzurri have temporarily given up on signing Chelsea star Frank Lampard and have turned their attentions to former Udinese star Muntari. Despite Portsmouth's reluctance to sell the Ghanaian international, the Italian champions have agreed a fee of ?12m with the Fratton Park outfit. Portsmouth directors will arrive in Milan on Friday and Muntari will undergo a medical at San Siro. Club doctor Franco Combi is set to leave Inter's camp in Brunico this evening to travel back to base top conduct the tests. Muntari will sign a five-year deal with a starting salary of nearly ?1.6m, which will rise to ?2.4m. The move is likely to put an end to the Nerazzuri's interest in Portuguese ace Ricardo Quaresma.