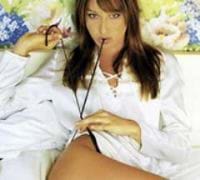 Paris - French first lady Carla Bruni releases a third pop album in July featuring 14 songs, most of which were written before she met President Nicolas Sarkozy, her agent said on Monday. The yet untitled album includes a vintage Bob Dylan tune, an Italian song and a piece based on a poem by French author Michel Houellebecq, said Bruni's agent Bertrand de Labbey. Among the brow-raising titles on the album are My Junk about drugs and Love Song, but De Labbey said they were both written more than two years ago. Bruni, 40, composed the music and wrote the lyrics to most of the songs on the album that is due out in France, Britain, Germany and in her native Italy on July 21. "Ninety-five percent of the songs on the album were written before she met the president," De Labbey said. "The voice tracks are done but the album still needs some sound mixing. It's just a matter of perfecting it but, as she is a perfectionist, it will take time," he added. Bruni, a former supermodel who veered into music in her mid-thirties, married Sarkozy in February after a three-month romance and has said she will be his wife "until death." Her first album Quelqu'un M'a Dit (Someone Told Me) relased in 2002 was a hit with some 1,2 million copies sold in France and 800,000 abroad. But her second release No Promises in early 2007 was considered a disappointment with only 80 000 copies sold. The album featured English poems set to music.